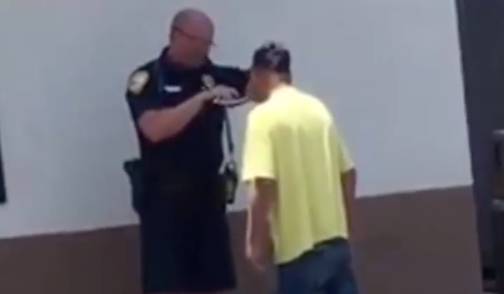 The homeless man seen in a viral video getting help shaving from a police officer in Tallahassee, Florida, has landed a job. The man, identified by his first name Phil, will officially start working Tuesday at McDonald's, a company spokesperson said.

Raphael Vazquez, who owns and oversees the McDonald's on Thomasville Road, told CBS News on Monday that he was impressed with Phil's determination from the start and found out about him like everyone else, via the widely watched video on social media more than a week ago.

"The way I found about it was through the viral video," he said. "I had to call Judy, 'Do you know about a homeless man we're hiring?'" Judy McClellan is a recruiter at the McDonald's.

The footage shows Officer Tony Carlson helping Phil shave his beard with an electric razor outside a Circle K gas station July 21. Phil needed to cut it off so he could apply for a job next door at the McDonald's.

Before the interaction, McClellan was talking about online applications when Phil interrupted her. According to Vazquez, Phil told McClellan he "can work harder than any of those guys."

McClellan could tell he was serious about the job when she spoke to him, Vazquez said. She told him to get rid of his beard and come back Monday.

Fortunately for Phil, Carlson helped him out with that.

"When I got out of my car, he asked me if I knew anything about electric razors and that it was broken, he was trying to get it to work, if I could help him," Carlson told CBS Evening News. "He was trying to shave, obviously outside, didn't have a mirror or anything and he was just getting patch after patch and it wasn't going too well. I said, 'Hey Phil, if you want me to do that, here, I can get it done a lot quicker than you sitting here struggling with it.'"

A stranger with a cellphone saw what was going on, posted it on Facebook and the rest is history.

Phil showed up July 23 to pick up his application, but needed to get his identification documents in order so they could complete the hiring process.

Sen. Marco Rubio's office in Tallahassee stepped in and helped sped up the process of getting his ID and Social Security card. On Monday, Rubio tweeted out congratulations from his Twitter account: