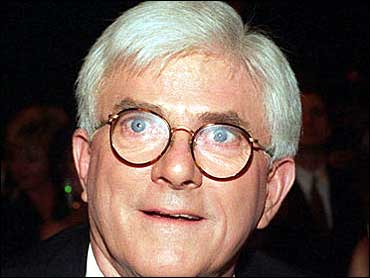 Donahue's final show will be Friday night. The news show that precedes him on the air, "Countdown: Iraq," will be temporarily expanded to two hours to replace him.

"We're proud of the program and we're disappointed that the show was not able to attract the viewership we had hoped for and expected," said Erik Sorenson, MSNBC president. "We thank Phil and his staff for their dedication, commitment and passion."

Donahue's office referred calls to his agent, and he did not immediately return a call for comment.

The move was not a surprise. MSNBC hoped "Donahue" would provide a liberal counterweight to Fox News Channel's competing "The O'Reilly Factor," but the ratings started poorly and didn't improve.

MSNBC tried to tweak the show in November, putting Donahue in front of a live audience in New York instead of in a New Jersey studio, but it made little difference.

The political talk show format has yet to prove - and may never - that it can support a liberal voice, said Andrew Tyndall, head of ADT Research, a television news consulting firm.

"They're very quick to cancel shows," Tyndall said. "Right from the start, they haven't settled on a format and let it grow so people can find it. If it's not working in a few months, they cancel it and move on to something else."

MSNBC also has sought a younger audience than its cable news rivals and the hiring of Donahue, 67, went against that strategy. "Anyone who's under 25 doesn't remember when his old talk show was on the air," Tyndall said.

During this month, a "sweeps" month in which ratings are watched closely to set advertising rates, "Donahue" averaged 446,000 viewers. O'Reilly drew 2.7 million viewers, up 28 percent from February 2002, according to Nielsen Media Research.

"Countdown: Iraq," with Lester Holt as host, is one of the network's few success stories, occasionally inching past CNN to second in the cable news ratings.

Donahue was a nine-time Daytime Emmy winner for his syndicated talk show, which began in 1967 and aired nationally from 1970 to 1996, paving the way for dozens of such shows to follow.

He began his MSNBC show July 15 with a panel discussion on whether the United States should try to oust Saddam Hussein. On Monday night, with Rosie O'Donnell as guest, they talked about the same topic.

The show's failure is "a footnote" to Donahue's career, Tyndall said. "His legacy is unharmed," he said. "He invented an entire genre of television."