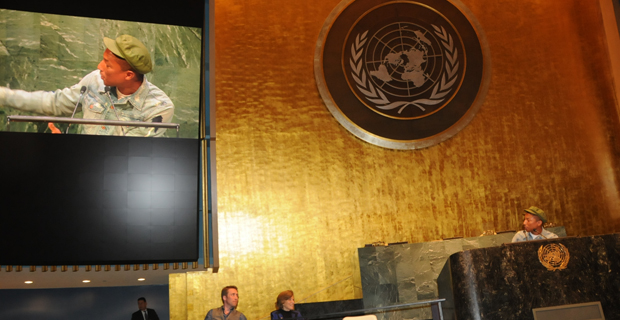 The U.N. sponsored the event, along the U.N. Foundation and MixRadio, to celebrate International Day of Happiness, established by the world organization in 2012. It transformed a normally conflict-focused, staid venue into a dramatically "happy" environment with a clear message: The next generation needs to pay attention to climate change.

"Protecting our planet is fundamental to the pursuit of human happiness," Pharrell said, telling the enthusiastic crowd, "We only have one home and there's climate change... If you don't (take) care of your home, you don't have a life, and we have to transition from climate change to climate action."

Just an hour before, Pharrell flipped the switch on the Empire State Building, turning the iconic building's lights yellow as part of the International Day of Happiness observance.

"The International Day of Happiness has provided an opportunity to open up a real conversation on how we take positive action to battle the real threat climate change," Robert Skinner, associate director of the U.N. Foundation's New York Office, told CBS News.

A young Brooklynite, Marquis Jamont, was there with his mom to see Pharrell, whom he described as a great person.

"Without Pharrell," Marquis said, "our planet would not survive."

A group of eight- and nine-year-olds from Immaculate Heart of Mary School in Scarsdale, N.Y., had their own messages.

"I'm from Seychelles and it's a small island, and I don't want it get flooded," said Giselle Ondieki.

Penelope Danielle Anastasia Latrique, the daughter of a U.N. staff member, goes to the Growing Up Green Charter School, which focuses on climate change.

"Pharrell is inspiring; he makes a happy day happy about the climate," she said.

Ahmad Alhendawi, the secretary-general's envoy on youth, told CBS, "What is happening in climate change is affecting young people's lives; this year is very important and the outreach that celebrities have is vital."

Although the plan was to have Pharrell speak and then dance in the General Assembly aisles, as soon as he finished, students went to the front to snap selfies with the new climate change czar and, of course, to change the world.