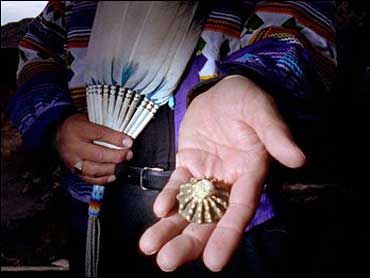 A study of the effects of peyote on American Indians found no evidence that the hallucinogenic cactus caused brain damage or psychological problems among people who used it frequently in religious ceremonies.

In fact, researchers from Harvard-affiliated McLean Hospital found that members of the Native American Church performed better on some psychological tests than other Navajos who did not regularly use peyote.

A 1994 federal law allows roughly 300,000 members of the Native American Church to use peyote as a religious sacrament. The five-year study set out to find scientific proof for the Navajos' belief that the substance, which contains the hallucinogen mescaline, is not hazardous to their health even when used frequently.

The study was conducted among Navajos in the Southwest by McLean psychiatrist John Halpern. It compared test results for 60 church members who have used peyote at least 100 times against those for 79 Navajos who do not regularly use peyote and 36 tribe members with a history of alcohol abuse but minimal peyote use.

Those who had abused alcohol fared worse on the tests than the church members, according to the study.

Church members believe peyote offers them spiritual and physical healing, but the researchers could not say with any certainty that peyote's pharmacological effects were responsible for their test results.

"It's hard to know how much of it is the sense of community they get (from the religion) and how much of it is the actual experience of using the medication itself," said Harrison Pope, the study's senior author and director of the biological psychology laboratory at the hospital near Boston.

The researchers argue that their findings should offer "reassurance" to the 10,000 Native American Church members serving in the military who were barred from using peyote before new guidelines were adopted in 1997.

"We find no evidence that a history of peyote use would compromise the psychological or cognitive abilities of these individuals," they wrote in their paper published in the Nov. 4 issue of Biological Psychiatry.

The researchers note that their study draws a clear distinction between illicit and religious use of peyote. They did not rule out the possibility that other hallucinogens, such as LSD, may be harmful.

"In comparison to LSD, mescaline is described as more sensual and perceptual and less altering of thought and sense of self," they wrote, adding that peyote does not seem to produce "flashbacks" the same way that LSD apparently does.

The project was funded in part by the National Institute on Drug Abuse, which is part of the U.S. Department of Health and Human Services. A NIDA spokeswoman would not comment on the study.

Lester Grinspoon, a Harvard Medical School psychiatry professor who was not involved in the research, said the study lends scientific weight to a long-held belief that peyote is not harmful.

"The thing that excites me most about the paper is that the study was actually done," he said. "The U.S. government and NIDA, in particular, has been rather balky about allowing studies of psychedelic drugs of any kind."