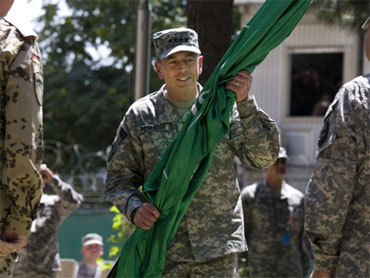 Gen. David Petraeus formally assumed command of the 130,000-strong international force in Afghanistan on Sunday, declaring "we are in this to win" despite rising casualties and growing skepticism about the nearly 9-year-old war.

During a ceremony at NATO headquarters, Petraeus received two flags - one for the U.S. and the other for NATO - marking his formal assumption of command.

He said it was important to demonstrate to the Afghan people and world that al Qaeda and its extremist allies will not be allowed to again establish sanctuaries in Afghanistan from which they could launch attacks on the United States and other countries.

"We are in this to win," Petraeus told a crowd of several hundred NATO and Afghan officials at the ceremony held on a grassy area just outside coalition headquarters. "We have arrived at a critical moment."

Petraeus succeeded Gen. Stanley McChrystal, who was fired last month for intemperate remarks he and his aides made to Rolling Stone magazine about Obama administration officials who were mostly on the civilian side.

"Upfront I also want to recognize the enormous contributions of my predecessor, Gen. Stanley McChrystal," Petraeus said. He said the progress made reflected McChrystal's "vision, energy and leadership."

Petraeus said the change in command did not signal a radical shift in McChrystal's strategy of making the protection of the Afghan people the focus of the military mission. He stressed the importance of avoiding civilian casualties, but said he would examine the civilian and military policies "to determine where refinements might be needed."

That suggested he would review the rules under which NATO soldiers fight, including McChrystal's curbs on the use of airpower and heavy weapons if civilians are at risk. Some troops have complained such restraint puts their own lives at risk and hands the battlefield advantage to the Taliban and their allies.

"We must never forget that the decisive terrain in Afghanistan is the human terrain," Petraeus wrote Sunday in a memo to his troops, praising their effort. "Protecting those we are here to help nonetheless does require killing, capturing or turning the insurgents. We will not shrink from that."

Petraeus noted that June had been the deadliest month for the international force since the war began in October 2001 with 102 deaths, more than half of them Americans.

"As you and our Afghan partners on the ground get into tough situations, we must employ all assets to ensure your safety, keeping in mind, again, the importance of avoiding civilian casualties," he said.

In southern Afghanistan, four civilians were killed and five others were wounded Sunday by a remote-controlled bomb set up on a motorcycle in a bazaar in Musa Qala, said Dawood Ahmadi, a spokesman for Helmand province. At the time of the blast, police were busy defusing another bomb planted on a donkey, Ahmadi said.

Britain's Ministry of Defense reported that a Royal Marine was killed Thursday in southern Afghanistan - the fifth international service member killed this month.

Since arriving here Friday evening, Petraeus has sought to make cooperation between the civilian and military parts of the international mission a top priority.

Petraeus, widely credited with turning around the U.S. war effort in Iraq, faces rising violence and growing doubts in Washington and other allied capitals about the effectiveness of the counterinsurgency strategy in Afghanistan, which the general himself pioneered.

Petraeus met with Afghan President Hamid Karzai on Saturday. Corruption was one of the issues the two discussed, according to a statement issued by the presidential palace. Karzai used the meeting to complain about what he said were "baseless" allegations made by U.S. Rep. Nita Lowey, a Democrat from New York, who suggested Afghan government officials had misused or pocketed donor funds, Karzai's office said.

Karzai asked Petraeus to review international contracts for private security companies to help keep money from flowing out of the country. According to the statement, Petraeus told the president he would begin his job by emphasizing "unity, accountability and transparency."
By Associated Press Writer Deb Riechmann