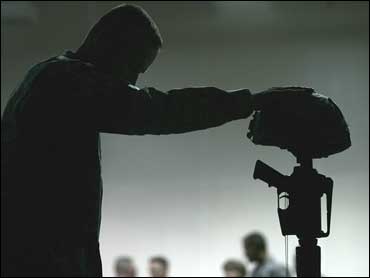 Citing a 60 percent decline in violence in Iraq over the last six months, the top U.S. commander in Iraq said Thursday that maintaining security is easier than establishing it and gives him more flexibility in deploying forces.

Armed with charts showing that as of Wednesday, weekly attacks and Iraqi civilian deaths have continued to plunge to levels not seen here since early 2006, Gen. David Petraeus said the reduction lets him make force adjustments to address remaining problem areas, which would include northern Iraq.

Speaking to reporters at the U.S. military's Camp Victory, he said the improved security is due to a number of factors including a "a reduction in some of the signature attacks that are associated with weapons provided by Iran," as well as a cease-fire called by radical Shiite cleric Muqtada al-Sadr that he said had a particularly noticeable impact what had been one of the most violent areas of Baghdad.

The U.S. military has accused Iran of funding and arming Shiite extremists, particularly with explosively formed penetrators, an armor-piercing roadside bomb that has killed hundreds of U.S. troops. Tehran denies the charge.

Petraeus noted the numbers of such attacks has gone down. But, he added, it is "hard to tell if that's because there has already been a cessation of provision of those items, or if there has been direction to stop."

At the same time, he said the military has detained individuals as recently as October who were trained by Iranians, evidence that the instruction has continued.

Petraeus, who is scheduled to give U.S. Congress and the American people an update next March on progress in Iraq, and map out some plans for U.S. force levels down the road, refused to offer too much optimism.

"Nobody says anything about turning a corner, seeing lights at the end of tunnels, any of those other phrases," said Petraeus. "You just keep your head down and keep moving."

He said that commanders reviewed violence trends in late November and found a steep decline from days a year ago in which hundreds of Iraqis were killed and American troops suffered heavy losses. He said attacks continued on a steady basis but were less deadly, pointing to a day last month when there were just 45-50 attacks.

Petraeus met for about an hour Thursday with Defense Secretary Robert Gates, who was in Iraq for his sixth visit in the past year.

The general has overseen the military's build up in Iraq this year, as force levels jumped to 20 combat brigades, with more than 180,000 troops, during certain times when some of the units overlapped as they moved in and out of the country.

"There's nobody in uniform who is doing victory dances in the end zone," said Petraeus, saying it will require more tough work against a very dangerous adversary.