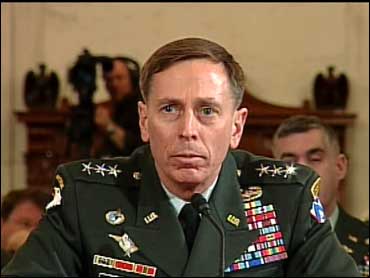 WASHINGTON - The initial U.S. troop withdrawals from Afghanistan in July probably will include combat as well as non-combat forces, the top U.S. commander there told a House committee on Wednesday.

Army Gen. David Petraeus mentioned no numbers, nor did he identify which combat units might be pulled out to begin what President Barack Obama has called a responsible winding down of the war by 2014.

Rep. Howard "Buck" McKeon, R-Calif., chairman of the House Armed Services Committee, led off questioning of Petraeus by asking whether combat troops would be included in the July withdrawals.

"I am still formulating the options that I will provide to the president and the recommendation that I make," Petraeus replied. "But I do believe there will be some combat forces included in those options and in that recommendation."

It is widely expected that a large share - if not the majority - of those initial American withdrawals will be support forces such as logistics specialists who helped in last year's U.S. troop buildup. Petraeus has said he foresees a tough combat season ahead this spring and summer.

The general said that in formulating his recommendation to Obama he will take into account several factors, including the capabilities of Afghan security forces, progress in improving the Afghan government's ability to deliver basic services, and the extent to which ordinary Afghans see their government as legitimate.

Petraeus did not say how many troops are likely to be pulled out in July, nor has Obama prescribed a specific number.

Rep. Duncan Hunter, R-Calif., later pressed the general to be more specific, asking whether each of the options he would present to Obama will include combat forces as part of the initial troop reduction.

Petraeus refused to be pinned down but seemed to be less definitive about including combat troops. At one point he said they "could be included" in one or more of the options for Obama.

"I'm still working on the options," he said, noting that he has "some months" to develop them. "Any commander always wants as much flexibility as he can have prior to providing options and recommendations, and so we are going to exercise that to the best of our ability."

Facing a skeptical Congress and a war-weary public, Petraeus is trying to build support for the continued and costly U.S. involvement in Afghanistan, telling lawmakers the conflict is turning around despite concerns about the viability of President Hamid Karzai's government and the dedication of neighboring Pakistan to root out terrorism.

Few on the House committee challenged Petraeus' overall assessment that the war is making important progress against the Taliban. But some questioned the wisdom of setting July as the start of a troop withdrawal. Rep. Mac Thornberry, R-Texas, said he worries that the July date undercuts the U.S. mission.

Petraeus said Thornberry might be correct were it not for a NATO decision last November to pledge to stay engaged in the war until the end of 2014. He said ordinary Afghans have told him that the 2014 commitment provides reassurance that the U.S. and other international partners will not abandon them.

His first day of Capitol Hill testimony Tuesday came as a new Washington Post-ABC poll found that nearly two-thirds of Americans consider the war no longer worth fighting. He acknowledged the growing opposition.

"I think it is understandable that the American people could be frustrated that we've been at this for 10 years and, you know, we haven't won yet," he said.

Sen. Susan Collins, R-Maine, said the Afghans - and by extension the American people - may find it difficult to reconcile the Obama administration's objectives.

"On the one hand, we hear the president - and Gen. Petraeus has repeated it today - that we're going to start withdrawing our troops this summer in order to underscore the urgency and undermine the Taliban narrative that we're going to be there forever," Collins told Petraeus and Michele Flournoy, the undersecretary of defense for policy. "On the other hand, both of you have said how important it is that ... we do need a long-term relationship. I would just suggest that I think that's part of the confusion that we see reflected in the polls about exactly what is our long-term strategy."

Petraeus said Tuesday that he didn't see the objectives as "mutually exclusive strands of logic."

Defense Secretary Robert Gates said last week while visiting Kabul that a U.S. delegation would begin discussions this week with the Afghan government on sketching out a relationship that would last beyond 2014, the target date for ending U.S. and NATO combat. In her testimony Tuesday, Flournoy offered no details but said the U.S. interest lies in providing longer-term training to Afghan forces.

"We are in the process of discussing what kind of parameters should outline that partnership," she said. "I should also add, it goes far beyond the military domain, to look at how we can support further development of governance, economic development and so forth."

She said this would not involve any permanent U.S. military bases in Afghanistan.

Petraeus said much of the Taliban's battlefield momentum has been halted, putting the U.S. on course to begin pulling out troops in July and shifting security responsibility to the Afghans.

"The momentum achieved by the Taliban in Afghanistan since 2005 has been arrested in much of the country and reversed in a number of important areas," Petraeus said. "However, while the security progress achieved over the past year is significant, it is also fragile and reversible."

Pressed repeatedly by lawmakers as to why U.S. forces should stay in Afghanistan, Petraeus said, "Two words, and those are 9/11," referring to the Sept. 11, 2001, terrorist attacks. He said the United States made a grievous error in abandoning Afghanistan once before.

"I think it would be a mistake, a big mistake, to go down that road again," he said.