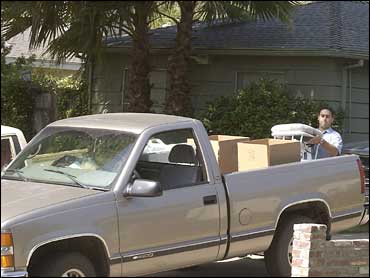 Attorneys for Scott Peterson are accusing the prosecution of "grave prosecutorial misconduct" and asking the case's judge to consider sanctions, up to and including removal of the Stanislaus County, Calif., district attorney's office from the case.

At issue are wiretaps on telephone calls between Peterson and his defense team that investigators intercepted, reports the Modesto Bee.

"I need to assess what was told to who, and I need people under oath to do it," defense attorney Mark Geragos said Monday.

Peterson, 30, is accused of the murder of his pregnant wife Laci and their unborn son Conner last December.

His lawyers also say her family damaged their case last week when a group of people, including her brother Brent Rocha, removed personal items from the Peterson home in Modesto, Calif.

Defense attorneys filed a request Monday for a hearing on the phone calls, so that they can question investigators and a prosecutor under oath about the wiretaps.

Other sanctions the Peterson defense team may seek include excluding testimony from any investigator or attorney involved in the wiretaps, and barring any evidence unless prosecutors can demonstrate it did not come from the eavesdropping.

"This is not unanticipated," Chief Deputy District Attorney John Goold said Monday. "We're certainly not opposed to whatever the judge requires. If the judge wants somebody to testify, we're happy to have them testify."

Police were called to the Peterson home Friday as possessions were being removed by the Rocha family, but decided nothing illegal was under way.

"We're treating this as a civil dispute over property," police Capt. Greg Savelli said. "It was clear to the Police Department that this was not a burglary."

Goold agreed "this is a civil problem between the Rochas and the Petersons."

Lee Peterson, Scott Peterson's father, said the defense team had wanted to videotape the house before items were removed and that lead lawyer Geragos had not agreed to the removal of any items.

Sources tell Gloria Gomez of CBS affiliate KOVR that Laci's family did bring a video camera and took pictures of every room in the house before and after items were taken.

Whether or not Laci's family had permission to enter the Peterson home remains the big debate. The Rochas' attorney said they had every right to collect Laci's personal belongings, and were even given permission by Scott's mother Jackie on national television.

Meanwhile, Gomez reports the defense team is looking for a man named "Donny" who may be driving around in the brown van the defense team has been trying to track down. The defense believes this mystery man and the group he's with may be linked to Laci's kidnapping and murder.

Scott Peterson's lawyer, Mark Geragos, said over the weekend he does not want to "fight it out in the media," but O.J. Simpson prosecutor Marcia Clark says his deeds don't match his words.

"For someone who says he doesn't want to try his case in the media, he's doing a bang-up job," Clark told CBS News Early Show co-anchor Hannah Storm. Geragos is "throwing a lot of red herrings out there, taking little bits and pieces of evidence and taking them out of context, blowing them up into something that will support a hair-brain theory like the satanic cult."

Geragos is trying to change public opinion, which has been very much against Scott Peterson, but it could backfire.

"The more theories he throws out there, and the more hair-brain they seem, the more it becomes clear that there is no viable defense and Scott Peterson is guilty," Clark said. "You throw too many theories out there, it can come back to bite you."

Stanislaus County Superior Court Judge Al Girolami demanded last week that leaks of sealed information stop, and indicated he would consider a gag order to stop the prosecution and defense teams from talking to the media.

Clark warns a gag order won't stop the two sides from trying the case in the media.

"All that happens with a gag order is that the lawyers themselves don't go out on camera, but all of the people that you don't see, the unidentified sources, so to speak, do," she told CBS News. "They'll be leaking like crazy to every reporter, and then you just can't trace it down."

Clark said she admires the prosecution's restraint, after California Attorney General Bill Lockyer described the case as a "slam dunk" against Peterson.

"The prosecution's doing their best to keep their heads up and keep away from the media and keep the case tried in court without doing any response to a lot of this media blitz that Geragos has got going, and that requires a lot of restraint," the former O.J. Simpson prosecutor said. "It can be extremely frustrating to listen to misinformation, disinformation coming out about the case that is bending public opinion perhaps, and not respond."