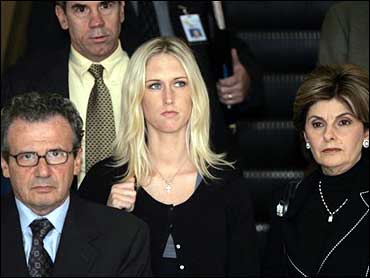 While the search for his pregnant wife was in full swing, Scott Peterson spent hours on his cell phone apologizing to his mistress for lying to her, according to prosecutors.

"You've been calling ... having conversations with me when all this is happening?" Amber Frey asked him

All day, the jury heard Amber grill the man she hoped would be part of her future, reports Gloria Gomez of CBS Affiliate KOVR in Sacramento.

Thursday marked the third day of testimony for Frey, the government's star witness, but she did not take the stand during Peterson's double murder trial. Prosecutors resumed playing tapes of telephone calls between Peterson and Frey that were recorded as authorities searched for Laci Peterson in late December 2002 and early January 2003.

Judge Alfred A. Delucchi told jurors before court ended for the week that more of the recorded calls would be presented Monday and Tuesday. Frey was expected to take the stand again Wednesday to answer questions.

"I've felt that they (the jury) had an enormous amount of attention focused on those tapes. And also, on Miss Frey's testimony, which they were listening to," Frey's attorney, Gloria Allred said on CBS News' Early Show "I think that for everyone in the courtroom, those tapes were extremely unusual and very, very powerful. Very powerful in support of the prosecution's theory of this case. This week, the prosecution dropped the A-bomb. The A-bomb is Amber."

In one of the last recorded calls between Peterson and Frey, she confronted him about the disappearance of his wife.

"The media has been telling everyone that I had something to do with her disappearance," Peterson told Frey in the Jan. 6 call. "So the past two weeks I've been hunted by the media. ... I know that I am, you know, I'm destroyed."

The audio tapes are an effort by authorities to show jurors that Peterson's motive to kill his wife and their unborn child was to be with Frey, a massage therapist. Police believe Peterson killed his wife in their Modesto home on or around Dec. 24, 2002, then drove her body to the bay and dumped her overboard.

At times, Peterson looked bored, glancing off into space, even smiling occasionally at his own remarks. He followed the tapes by reading printed transcripts.

On the tapes, Frey asks why Peterson called her when he said he was on his way to Maine to meet his parents — a trip he never took.

"At those times I needed to hear your voice," Peterson said, sounding mournful.

"The 24th," Peterson said, stammering his way through excuses about how he misunderstood her question.

In earlier testimony, Frey told jurors she called police after discovering her lover was not only married, but suspected in the disappearance of his pregnant wife.

At the request of police, she began recording her calls with Peterson with a device bought for her by the Modesto Police Department. Ultimately, more than 300 calls between Peterson and Frey were recorded.

In the Jan. 6 call, Peterson, who had pretended for weeks to be calling Frey from Europe, confessed to her that he had been lying.

"During the last couple of weeks I have lied to you that I've been traveling."

Instead, Peterson said he had spent the past weeks helping authorities search for his wife.

In a call later that day, Frey asks Peterson why she shouldn't be afraid of him. He responded, "I am not an evil person... I would never hurt anyone."

Peterson told Frey, "Our hope, and it's a sad hope, is that ... well, I mean we need a tip. That's why we have such a big reward. We just hope that someone is holding her for her child and that we can, you know, get her back with a tip."

Frey asked Peterson, "What if she's found dead?" He responded, "My God, don't say that." Frey persisted, and Peterson said, "All our questions are answered and then we can find the bastards that did it."

The badly decomposed remains of Laci Peterson and the couple's fetus washed ashore in April 2003, not far from where Peterson said he launched a solo fishing trip the day she vanished.