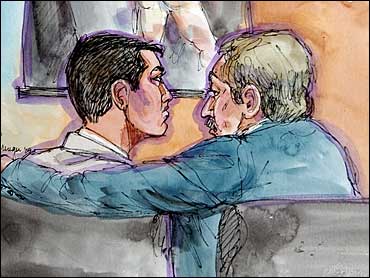 Scott Peterson's lawyer said Wednesday that prosecutors have a flimsy circumstantial case against his client — and he can show Peterson didn't kill his pregnant wife because the fetus she carried was born alive.

That assertion highlighted the two-hour opening statement of defense lawyer Mark Geragos, who told jurors the boy whom the couple intended to name Conner didn't die in the womb, as prosecutors assert.

"We knew the truth," said his mother, Jackie Peterson, after the day's session. "It was nice to hear it publicly."

48 Hours Mystery reports on the Scott Peterson trial.
Geragos indicated he will call experts to testify that the fetus was older than it would have been if it died at the same time as Laci, and that the umbilical cord was cut in such a way that the child must have been removed from Laci Peterson while still living.

Prosecutors have said their experts will testify that the fetus was expelled well after Laci Peterson's corpse was dumped into San Francisco Bay.

Prosecutors allege Peterson killed his 8-months-pregnant wife on or around Dec. 24, 2002, then disposed of her body during what he tried to disguise as a fishing trip.

"If this baby was born alive, clearly Scott Peterson had nothing to do with this murder," Geragos said. "The evidence is going to show that (Laci) was alive on Dec. 24 when Scott went to the marina."

It was the first formal glimpse inside a strategy to clear Peterson by suggesting that somebody else was the killer. Peterson, 31, could face the death penalty or life without parole if convicted in the trial that's expected to last six months.

Prosecutors have portrayed Peterson as a lying cheat who killed his wife because he was having an affair with massage therapist Amber Frey — and because he wasn't ready to become a father.

Geragos countered Wednesday that while the former fertilizer salesman had a mistress, it doesn't mean he killed his wife.

"He's not charged with having an affair. ... The fact of the matter is that this is a murder case and there has to be evidence," he said.

Geragos downplayed Peterson's interest in Frey, saying they only went out on two dates, and characterized him as a giddily expectant father who accompanied his wife to all her doctor's appointments.

"Mark Geragos has an uphill battle to change perceptions about his client and I think he's off to a good start. His opening statement makes sense with what he has to deal with; he's not telling jurors that his client is a saint, he's just telling them that a cheating husband isn't necessarily a murdering husband," says CBSNews.com Legal Analyst Andrew Cohen.

For Scott Peterson's side the first point scored against prosecutors came from an unlikely source: a Martha Stewart cooking show featuring meringue, reports CBS News Correspondent John Blackstone: Geragos showed jurors part of the Martha Stewart show from Christmas Eve to prove Scott was truthful. He'd told police that's what Laci was watching the last time he saw her. Prosecutors claimed Stewart had not made meringue that day. The videotape proved otherwise.

"The meringues started the whole thing, started all the warrants and they lied about that," said Scott's brother.

During his opening statements Tuesday, prosecutor Rick Distaso didn't promise jurors they would hear about a murder weapon or an eyewitness to the crime, and Geragos seized on the circumstantial nature of the case.

Authorities in the couple's hometown of Modesto secured more than 100 bags of material from Peterson's home, car and warehouse, and state crime lab scientists analyzed the evidence exhaustively, Geragos said.

"What did they get out of all those tests? Zip, nada, nothing," he said.

In fact, Geragos said, at least three eyewitnesses saw Laci Peterson after her husband left to go fishing on the bay.

Geragos has offered a series of explanations for the crime. Instead of pursuing other leads, authorities "turned his life upside down" as they single-mindedly pursued Peterson, Geragos said.

Prosecutors said Peterson used a recently purchased boat to ferry his wife's body to San Francisco Bay from a marina in Berkeley. Her remains and that of the fetus washed ashore in April 2003, near where Peterson says he took the solo fishing trip the previous December.

Prosecutors also have said that Laci Peterson didn't know about the boat, but on Wednesday Geragos insisted she had seen it Dec. 20 and that people saw her at the warehouse where the boat was stored.

The day closed with testimony from the first prosecution witness the Petersons' housekeeper, Margarita Nava. Nava testified in Spanish that she cleaned the home's kitchen floor Dec. 23.

Prosecutors contend also Peterson cleaned and mopped his kitchen after killing his wife, and have seized the mop as evidence.