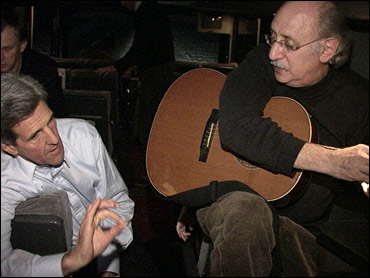 
Things felt a bit different Tuesday on the John Kerry campaign bus and it had nothing to do with anything remotely political. There was a huge void; something was missing. It was the day after Peter, Paul and Mary's Peter Yarrow, who had been in Iowa campaigning with Kerry, left for his next stop.

Yarrow, who has known Kerry for 35 years and has endorsed him, arrived on Saturday without much fanfare but by the time he left, he had provided so much more than excitement among Democratic caucus-goers; he had given the gift of a treasure trove of unforgettable stories – some great, some just odd.

The great stories included: an impromptu 35-minute jam session on the back of the Kerry bus Sunday night with just the candidate, a few aides and the press in attendance. Yarrow strummed his guitar and sang such classics as "Lemon Tree," "Leaving on a Jet Plane," and "Secret Survivor." For a moment, one could feel what it was like back in the '60s, hanging with a folk music icon and a Vietnam vet-turned-antiwar activist.

Yarrow's singing at Kerry's campaign events over the weekend not only got the audiences to join in harmony but seemed to energize Kerry on the stump. At one event in Oskaloosa, Yarrow fired up the crowd when he discovered during his closing performance of "If I Had a Hammer" that Kerry was speaking with a man who had switched his party affiliation because of Kerry.

Yarrow's performances of "America Come Home," a song he wrote for Kerry's 60th birthday last month, harkened back to a time when music had a political message. Singing about the Iraq war, Yarrow sang, "We dreamed of peace, we'd seen the price of war's obscene destruction / The broken souls, and spirits scarred beyond all recognition / As the lie was told, their fiction spun, with nary rhyme nor reason / 'The emperor has no clothes,' we cried. / And they, of course, cried, 'Treason!'"

Speaking of the war in Iraq, that's where Yarrow's presence seemed to become a double-edged sword for Kerry – not just fun and entertainment, but a little trouble as well.

On Saturday, during his first event with Kerry, Yarrow caused a stir with his comments on Kerry's Iraq vote that made it into the pages of The New York Times.

Yarrow went on to say he thought the vote hurt Kerry's candidacy. Later on the bus, Yarrow clarified his statement, saying he supports Kerry on "98 percent; no, 99; no, 99.9 percent of the issues."

The event also featured the first of several run-ins Yarrow would have with Kerry's staff as they tried to escort him onto the bus after his aforementioned comments, telling Yarrow that the candidate was already on the bus.

"John is over there. John is not done talking," Yarrow said. "Don't try to move me when I'm still talking."

Kerry aides were shaking their heads after a Yarrow-inspired scene turned out a little weird. At a house party thrown by Story County Democrats, Yarrow summoned Kerry to the living room where he had just started playing "Puff the Magic Dragon." At one point, as Yarrow sang the word "puff," Kerry quickly gestured as if he was smoking pot.

On Monday, Yarrow had another tense conversation with a Kerry aide at an Ottumwa event as time constraints prevented Yarrow's closing number. "I feel like I need to sing again," Yarrow told the aide. Then, when Kerry was stopped on the way out to sign autographs and shake hands, Yarrow complained, "Why aren't we leaving? I could be playing." Eventually, Yarrow said to the aide, almost apologizing, in a style that seemed a throwback to his '60s peacenik days, "I'm Peter. And I love you."

As of Tuesday, Yarrow had left the campaign trail, giving untold numbers of Democrats, as well as Kerry's staff and the press, some memories not soon to be forgotten.