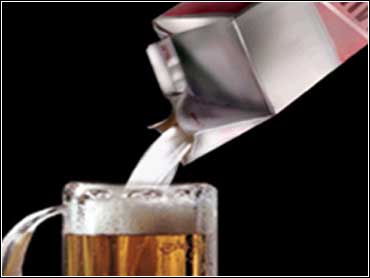 A new ad campaign by an animal rights group urging college students to replace their milk mustaches with beer foam has angered anti-drunken driving activists and the dairy industry.

Norfolk-based People for the Ethical Treatment of Animals had planned to unveil its "Got Beer?" campaign on college campuses nationwide this week, in time for those green-beer St. Patrick's Day celebrations.

CBS News Correspondent Jim Axelrod reports that PETA's efforts come at a time when the percentage of college students going on drinking binges stayed pretty much the same through the 1990s and the percentage of frequent bingers actually increased.

PETA says the dairy industry is cruel to cows and contends milk isn't as healthy as beer because of its fat content, a claim scoffed at by nutritionists as oversimplified.

Mothers Against Drunk Driving asked PETA to pull the campaign.

MADD spokeswoman Millie Webb says, "My reaction to ‘Got Beer’ is ‘Get Real.’ If the campaign had been ‘Got Water’ or ‘Got Juice’ you wouldn’t be seeing Mother Against Drunk Driving today.”

But PETA President Ingrid Newkirk says, ”If we said that drinking orange juice is better for you – instead of beer – we wouldn’t have gotten any publicity.”

She says, "We have to look for these oddball ways to get our message across, and yes, I regret that."

And it’s timing isn’t helping much either. Harvard released a study Tuesday that says 44% of college students are binge drinkers, consuming 5 or more drinks at a time.

Susan Ruland, a spokeswoman for the dairy industry's "Got Milk?" and milk mustache campaigns, called PETA's parody "ridiculous on so many levels. It's kind of amusing."

Cows produce more and better milk if they are treated well, so it would not make economic sense for dairy farmers to mistreat the animals, she said.

And David Swain, director of The Wellness Institute at Old Dominion University, said drinking nonfat milk eliminates the drawbacks of milk, adding: "Milk has many valuable nutrients in it that beer does not have."

Axelrod reports the people behind “Got Milk” may get sense. He says PETA’s publicity hounds may be calling off their hunt after receiving hundreds of critical calls and e-mails from their own members. The group is meetig on Wednesday to discuss the campaign.