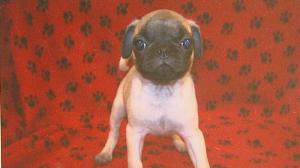 (CBS/KCNC) LONE TREE, Colo. - A puppy pilfered from a pet store - a pug, no less - has been returned to its proper owner, and the perpetrator has been arrested, say Denver area police.

The woman spent some time with the dog, then left and returned to Just Pets a few hours later.

"(She) really liked her, said she was in love with her; was going to think about her and come back," store owner Lisa Stone said, according to KCNC.

Stone said the woman said she wanted to buy the dog but needed a few more minutes. Meanwhile, another customer came in to look at kittens. When Stone went to the back of the store the pug-napper dashed out the front door.

"I didn't see anybody anywhere; nobody running, no car, no nothing -- gone," Stone said.

According to the American Kennel Club, pet theft is a growing problem nationwide. Approximately 224 pets have been reported stolen in the first 7 months of this year compared with just 150 in the same period of time last year.