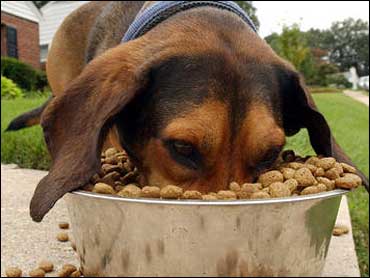 A major manufacturer of dog and cat food sold under Wal-Mart, Safeway, Kroger and other store brands recalled 60 million containers of wet pet food Friday after reports of kidney failure and deaths.

An unknown number of cats and dogs suffered kidney failure and about 10 died after eating the affected pet food, Menu Foods said in announcing the North American recall. Product testing has not revealed a link explaining the reported cases of illness and death, the company said.

"At this juncture, we're not 100 percent sure what's happened," said Paul Henderson, the company's president and chief executive officer. However, the recalled products were made using wheat gluten purchased from a new supplier, since dropped for another source, spokeswoman Sarah Tuite said. Wheat gluten is a source of protein.

The recall covers the company's "cuts and gravy" style food, which consists of chunks of meat in gravy, sold in cans and small foil pouches between Dec. 3 and March 6 throughout the U.S., Canada and Mexico.

The pet food was sold by stores operated by the Kroger Company, Safeway Inc., Wal-Mart Stores Inc. and PetSmart Inc., among others, Henderson said.

The company said it manufacturers for 17 of the top 20 North American retailers. It is also a contract manufacturer for the top branded pet food companies, including Procter & Gamble Co.

Henderson said the company received an undisclosed number of owner complaints of vomiting and kidney failure in dogs and cats after they had been fed its products. It has tested its products but not found a cause for the sickness.

"To date, the tests have not indicated any problems with the product," Henderson said.

The company alerted the Food and Drug Administration, which already has inspectors in one of the two plants, Henderson said. The FDA was working to nail down brand names covered by the recall, agency spokesman Mike Herndon said.

Menu Foods is majority owned by the Menu Foods Income Fund, based in Ontario, Canada.

Henderson said the recall would cost the company the Canadian equivalent of $26 million to $34 million.

A complete list of the recalled products along with product codes, descriptions and production dates was available from the Menu Foods Web site. Information can also be obtained by calling 1-866-895-2708.