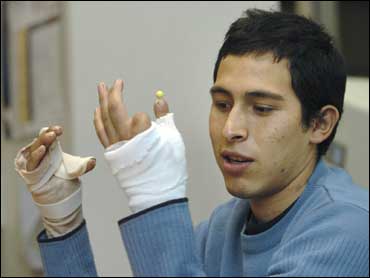 A former officer in the Peruvian army whose hands were injured after handling an explosive has two new "thumbs" after doctors transplanted one of his toes to one hand and turned the index finger into a thumb on the other one.

Francisco del Alamo-Benavente, 22, showed up at the hospital's Curtis National Hand Center three months ago with a stack of medical records and asked for the surgery.

His visa is set to expire on Friday, so doctors at Union Memorial Hospital made the unusual decision to perform both surgeries at once six weeks ago. Typically, surgeons would operate on one hand at a time, allowing the first to heal before working on the other.

"It was a fairly lofty expectation," Dr. James P. Higgins, who performed the toe-to-hand transplant along with Dr. Michael A. McClinton, told The (Baltimore) Sun. "We'd never do them bilaterally and simultaneously."

But they did, and Del Alamo-Benavente will return to Peru with new thumbs and pursue his dream of becoming a chef.

"It was just a setback," Del Alamo-Benavente said of the 2004 accident that blew off both his thumbs and his left index finger. "But now I know I'm going to do this."

Surgeons have performed toe-to-hand transplants since the 1970s. Though patients may not regain the sensation and strength they were born with, they often recover enough to perform essential tasks.

Doctors in Lima, the Peruvian capital, offered to fashion new thumbs for Del Alamo-Benavente by amputating two toes and attaching them to his hands. But he decided, along with his father, to explore options in the United States.

So far, Del Alamo-Benavente has gained little sensation in either of his new thumbs. With effort, he can move them slightly. Motion and strength could return sooner than feeling, which depends on the regrowth of nerve fibers.