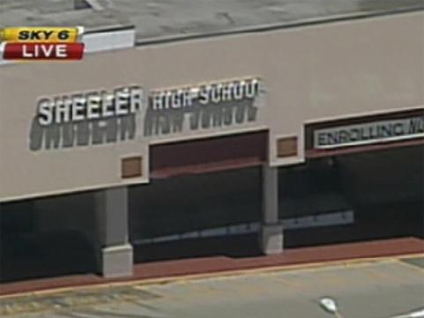 APOPKA, Fla. - A person was inadvertently shot Wednesday afternoon during a fight outside Sheeler High School in Apopka, police said.

The shooting happened about 12 p.m. at the charter school, CBS affiliate WKMG in Orlando reports.

According to police, two people who do not attend the school approached a student, and an altercation ensued. The pair started beating the student when one of them accidentally shot the other, police said.

A school administrator who was escorting students to and from a Lynx bus stop tried to break up the fight, and the duo, including the one who was shot, ran away, police said.

Apopka police said the administrator followed the pair into a nearby neighborhood, and they were arrested after officers spotted them on State Road 436.

The person who was shot was taken to Orlando Regional Medical Center with non-life-threatening injuries.

Police were questioning the student and other person involved in the fight.