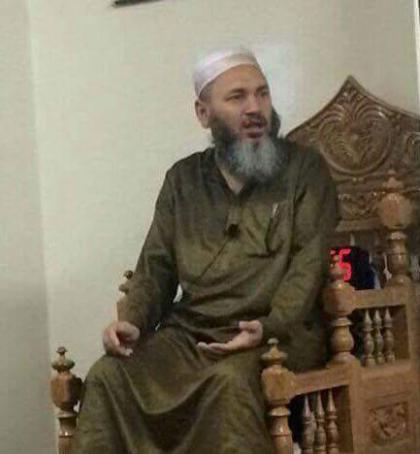 NEW YORK -- A person of interest was being questioned Monday in the slaying of a New York City mosque leader and his associate, CBS News has confirmed.

This, as a Muslim advocacy group prepared to announce a reward for information leading to an arrest.

Imam Maulama Akonjee, 55, and Thara Uddin, 64, were both shot in the head near the Al-Furqan Jame Masjid mosque in the Ozone Park neighborhood of Queens as they left afternoon prayers on Saturday in their traditional religious attire, according to police.

"He always wants peace," Akonjee's son, Naim Akonjee, 21, said of his father through tears. "Why did they kill my father?"

Investigators have detained and questioned a man as part of an attempt to identify a vehicle seen after the shooting.

Authorities say surveillance footage showed a car leaving the scene. Detectives checked a police database and found that a car with a matching description had been involved in a hit-and-run crash in Brooklyn, police said.

The crash happened after Saturday's killings and involved a bicycle, sources tell CBS New York. The cyclist was reportedly able to record the car's license plate. Investigators from a warrants squad tracked it to an address in Brooklyn where they waited in an unmarked police cruiser for the man to enter before blocking him in, police said.

The man intentionally bumped their vehicle with his car before he was placed in handcuffs, they said.

Sources tell the station the person being questioned is described as a Hispanic man from Queens.

The Council on American-Islamic Relations, or CAIR, was set to announce on Monday a $10,000 reward for information leading to the arrest and conviction of the shooter.

Police said they have not yet determined a motive for the killings, but some in the Bangladeshi Muslim community served by the mosque worry it could be a hate crime.

Monir Chowdhury, who worshipped daily with the two men, said he had moved to the community because of its large Bangladeshi immigrant population, but in recent months has been harassed by people shouting anti-Muslim epithets.

In one incident, a man called him "Osama" as he walked to the mosque with his 3-year-old son. With the killer still on the loose, Chowdhury decided it would be best to drive to prayer services.

Police on Sunday released a sketch of the suspected gunman, a dark-haired, bearded man wearing glasses. He was described by witnesses as a man with a medium complexion. A person who lives near the shooting scene shared with The Associated Press and other media organizations surveillance video that showed a man walking up behind the imam and his associate, shooting them and then walking off. Police said they were reviewing the video.

In a statement on Sunday, New York City Mayor Bill de Blasio, a Democrat, said the slayings were felt by all of New York City.

"While we do not yet know the motivation for the murders of Maulama Akonjee and Thara Uddin, we do know that our Muslim communities are in the perpetual crosshairs of bigotry," the mayor said. "It remains critical that we work to bridge the divides that threaten to undermine the greatness of our city and country."

An official with the government in Bangladesh condemned the killings on Twitter. The country's State Minister for Foreign Affairs, Mohammed Shahriar Alam, called the shooting a "cowardly act on peace-loving people."

About 1,000 people gathered Monday for an emotional funeral service for the two men in a municipal parking lot, about six blocks from the crime scene. Speaking at the service, de Blasio said Muslims make New York better and stronger.

The crowd applauded when he said that whoever committed the crime will be brought to justice. The mayor also vowed extra police protection for the community. Emotions ran high as some people shouted for justice.

Akonjee's son, Foyez Uddin, who isn't related to the other victim, tells The Associated Press in Bangladesh that his father and mother had booked flights for Aug. 31 to visit the elder man's ailing mother.

He says his family "cannot believe he is no more," calling the loss "irreparable."