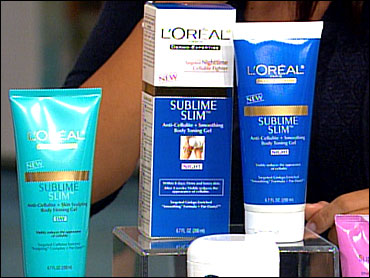 Instead of reaching for another cup of coffee, how about reaching for the latest thing in skin care products — offerings containing coffee or caffeine.

On The Early Show Monday, Allure magazine (www.allure.com) Editor in Chief Linda Wells had the buzz on those products, and showcased several.

She says coffee and caffeine are popping up in beauty products due to their tightening and antioxidant effects on the skin.

Caffeine, coffee's most well-known ingredient, works on skin in the three primary ways: as a vasoconstrictor, an antioxidant, and a diuretic.

Caffeine has been used for years in cellulite creams: It dehydrates fat cells, making the skin smoother. It's also used in de-puffing eye gels as a vasoconstrictor, to temporarily tighten skin and reduce dark circles.

What's more, recent studies on animals have shown that, when applied to the skin, caffeine may protect against sun damage to skin cells.

Coffee can now be found in face creams, body scrubs, and fragrances. Some just smell like coffee, some have actual ground coffee beans as exfoliates, and some contain caffeine for its antioxidant, dehydrating, and vaso-constricting properties.

Coffee in beauty products apparently isn't addictive. Dermatologists say there's no evidence that enough gets absorbed to lead to addiction.

Editor's note: The product descriptions that follow were prepared with Wells' help and that of the manufacturers of the items.

Caffeine is now found in some face creams and serums. The acid in it functions as an antioxidant. Because several studies have found that it may protect against sun-induced skin cancer, it's a great extra boost to your usual sunscreen and antioxidants. Because caffeine is also a vasoconstrictor, it has been shown anecdotally to help reduce skin redness.

TOPIX PEPLENIX CREAM, $54 available at skinstore.com and through dermatologists
Topix Replenix Cream is a great example. Dermatologists like this cream for its antioxidant and anti-aging effects for sensitive skin, because it contains caffeine, green tea, and hyaluronic acid. Hyaluronic acid is also an important ingredient for skin because it holds in moisture.

REVALE SKIN, about $110, available through Revaleskin.com
Revalé Skin serum has a promising new antioxidant source, coffee-berry. Coffee beans are seeds from the coffee cherry fruit. This fruit decays quickly. This company, however, found a way to process the fruit and extract high levels of antioxidants called polyphenols (caffeic acid, in caffeine, is a polyphenol), which are believed to prevent cellular damage when put on the skin. Coffee-berry is one of the most powerful antioxidants to date. It protects the skin from UVA damage.

ORIGINS NO PUFFERY, $20, available in department stores and origins.com
Origins No Puffery is a classic example. It's a cooling gel. You use it like a mask or put on a thin layer under makeup. It's a favorite around the Allure office.

Cellulite creams
Nothing cures cellulite or eliminates it entirely. The best we can do is make it look better for a few hours. Caffeine is the main ingredient in anti-cellulite lotions. It works by temporarily dehydrating fluid from fat cells, making them look smaller, according to dermatologists.

L'OREAL SUBLIME anti-cellulite gels, $13.89 each, drugstores
In an independent clinical study of L'Oréal products, 150 women lost an average of a half-inch off their thighs in four weeks.

A number of scrubs contain ground coffee beans or seeds as an exfoliate. There are also fragrances and lip balms with coffee or mocha, an invigorating scent. Smelling coffee can be a stimulant and make you alert, because you associate the smell with the invigorating effects of drinking coffee. It's a learned response.

OTHER PRODUCTS ON THE SET WERE PROVIDED BY: