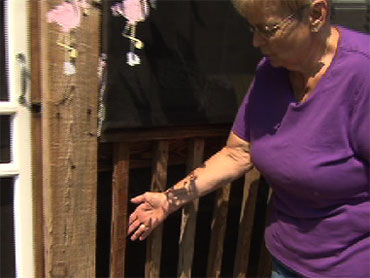 Americans spend lots of money on home improvements each year. But before your hire anyone, check out what "Early Show" Consumer Correspondent Susan Koeppen discovered.

Koeppen said on the show, "There are plenty of good contractors out there. But as we found out, many contractors go unlicensed and unchecked."

Koeppen pointed out that the home improvement business is booming in America, with homeowners spending close to $300 billion each year.

But what if someone turned your greatest asset into your worst nightmare?

Diane Bajner, a victim of an unlicensed contractor, told CBS News, "It's funny now, but I did a lot of crying, swearing and everything else back in July and August and September of last year."

Bajner, of Chicago, recently retired and decided it was time to upgrade her home.

"i just decided, 'Let's just go do the whole shebang."'

But what she didn't know was that her contractor was working without a license, even though one is required in Chicago where Diane lives.

Bajner said, "We were shocked at what we saw. I ran out of funds. I mean, I couldn't keep going."

After spending almost $30,000 dollars, Bajner and her husband had to start over.

Bajner said, "He promised you the world, but would do nothing."

Authorities estimate consumers lose millions of dollars to shoddy or unlicensed contractors in the U.S. every year.

In fact, only 25 states require contractors to have a license.

In one of them, California, Koeppen and her team met up with the investigators from the Contractors State License Board.

On the day Koeppen showed up, they were conducting a sting, luring contractors to a home in Redondo Beach.

All the contractors invited to the home were being asked to do major painting or repairs -- jobs that require a license.

And, instead of getting a job, one contractor got arrested.

When asked by Koeppen if he had been working without a license, he admitted he had.

And investigators say another contractor being arrested was arrested at another sting four years ago.

Koeppen asked one man, "Are you working without a license?"

At this sting, nine-out-of-nine contractors were busted for working without a license, Koeppen said.

Experts say hiring unlicensed contractors can be a risky proposition.

Koeppen spoke with Jerry Romiti, an investigator. She said, "When you have an unlicensed contractor, they can come take your money and just disappear."

Unfortunately for Bajner, even living in a city where contractors need a license, she's still out thousands of dollars -- and left picking up the pieces.

Bajner said she uses a shingle on her shed's roof -- one that's still hanging -- as "a reminder, a reminder to watch who I'm hiring."

Koeppen added on "The Early Show," "Here's something else to consider: If an unlicensed contractor is injured on the job at your house, he can sue you. And you never know who you're getting. The investigators in California told me that they've caught sex offenders, druggies and even murderers at some of their stings."

So what can consumers do to protect themselves? Koeppen shared these tips:

• Licensing requirements are based on where the home improvement job is performed. Each state and local licensing board across the country has its own procedures for catching unlicensed contractors. Some rely on consumer tips or work with building officials to ensure legality when a permit is pulled. Others perform random checks at work sites. However, all are limited by budget and staffing constraints, leaving the actual law enforcement running the gamut from barely there to nearly everywhere.
• Do your research - ask for more references than you think you need to. The small amount of time you spend initially will help prevent any unpleasant surprises and delays with your home improvement project. The best ways to find the names of home improvement contractors are: Personal references, someone you know employed the contractor previously and was satisfied with the finished job, and work sites where the quality of the completed job is visible. Check with your Better Business Bureau to see if any complaints have been filed.
• Pay in installments -- never ever pay all cash up front. Never pay the entire, or even a major portion of, the cost of the home improvement job before any work has begun. The home improvement contractor may require the consumer to make a down payment and pay for materials; this is a common practice. However, try to arrange to link additional payments to stages of completion. It is best to arrange to withhold a large portion of the cost of the job until the job has been completed to the customer's satisfaction and the customer has signed a certificate of completion.
• Once you've settled on a contractor, make sure all project expectations are in writing. Make sure that the full scope of the work is explained in the contract including cleanup and disposal of waste. All verbal agreements need to be included in the written agreement. Pay close attention to the payment terms, estimated price of materials and labor and any warranties or guarantees.

For more information, go to the Better Business Bureau and Angie's List.

Classroom Of The Future? No Chairs!