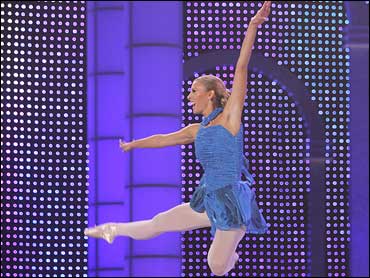 Becoming America's most idealized miss is a grueling exercise in good grooming and creative beauty tricks – not to mention the poise, talent, interview techniques and community service required to win the tiara and its accompanying $50,000 scholarship.

Contestants spend thousands of dollars on a wardrobe, often selected by a committee of interested parties and previewed in a home state "trunk show" attended by hundreds of friends, family and supporters.

2While some will get by on less than others, each arrived in Las Vegas on Jan. 19 for more than a week of rehearsal and competition with a heart full of expectations and suitcases full of products – nine suitcases, in Miss Georgia Amanda Kozak's case. "You only do Miss America once, you might as well have everything," she said while taking a break from a rehearsal for Monday's pageant.

Miss Colorado brought 25 pairs of shoes. Miss Florida paid $700 to ship her wardrobe in advance. Items in Miss Mississippi's 10 pieces of luggage included a humidifier for her skin and workout weights.

There are plenty more weapons in a contestant's arsenal.

They use toupee tape to keep dresses and costumes in place. Or in the case of Miss Kansas Michelle Walther, the tape is used with nylon to construct a sort of shoulder pad for one of her hips, which she says are uneven.

Before going to bed, Miss North Carolina Elizabeth Horton puts hemorrhoid cream on her thighs, wraps them in plastic wrap and puts on pantyhose. "It's for cellulite," she says.

(Warning: This treatment should not be performed on thighs also covered in self-tanning cream. Irregular streaking may occur, Horton said.)

3"OK, most of us have never done that before," Miss Montana Christie Hageman said.

Still, the mechanics of pageant prepping, like the 86-year-old pageant itself, have retained some quaint elements. While contestants are allowed to use stylists in preliminary competitions, they're required to do their own hair and makeup the night of the show. (Contestants who want to practice during the week have two extra mirrors added to their rooms.)

Wardrobes, which include a performance costume, an interview suit, at least two gowns and a bevy of cocktail dresses, are largely paid for by the contestants' state organizations and local sponsors, and state pageant executive directors are closely involved - which doesn't always put the contestants on the cutting edge of fashion.

"I think each girl has an individual style, and the most important thing is to be in good taste - dress appropriately and be in good taste," said Nan Teninbaum, executive director of the Miss Alabama pageant. "They're not going to be out there partying, it's a job."

Since the Miss America Organization in Atlantic City, N.J., entered into a new television contract with MTV Networks-owned Country Music Television in 2005, show producers have been trying to modernize the pageant's look. They've asked contestants to tone down their makeup and handed out $1,100 wardrobe stipends. Three contestants were chosen to model for designers Michael Kors, Donna Karan and Zac Posen for a spread in Elle magazine.

But that doesn't mean Miss America will be wearing a red carpet-ready dress in this year's evening gown competition. A pageant gown, while couture and fashionable, is a different animal, contestants say. It has to stand out to someone in the back row of a theater.

Designer Tony Bowls makes sure that's true. "A pageant gown is constructed to enhance and complement the girl," said Little Rock, Ark.-based Bowls. "Take one of my gowns, flip it inside out and you'll see breast cups, corsets and more sculptural elements. ... If it were hanging next to a Vera Wang, it would look almost like a body was hanging on the hanger inside it."

Contestants have to walk a fine line between enhancing and revealing. What a 22-year-old woman calls sexy, a panel of judges that includes MSNBC's Chris Matthews might find unbecoming.

"We pride ourselves on being role models, we have standards that we go by, we don't care what everyone else is doing because we are true to ourselves," Hageman said.

The Mortician, The Murder, The Movie
Thanks for reading CBS NEWS.
Create your free account or log in
for more features.
View CBS News In
CBS News App Open
Chrome Safari Continue
Be the first to know
Get browser notifications for breaking news, live events, and exclusive reporting.