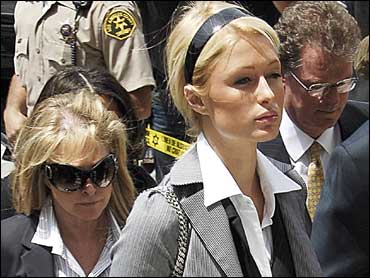 Paris Hilton's mom hopes that young people will learn from her daughter, who was sentenced to 45 day in jail for violating her probation.

In a statement given to Barbara Walters, Kathy Hilton said, "We can only hope that something positive will come from all of this. Hopefully young people who look up to people like Paris will learn from this."

Walters said she and Kathy have been friends for many years before she read the statement on "The View" Wednesday.

On May 4 when a judge ruled that Paris would go to jail, Kathy Hilton blurted out in the court room: "May I have your autograph?"

Five days after she was sentenced Paris released a statement that said she was ready to face the consequences of her actions.

"I do not expect to be treated better than anyone else who violated probation. However, my hope is that I will not be treated worse," she said.

Earlier this week, a psychiatrist who is treating Paris said she is "emotionally distraught and traumatized" over her jail sentence.