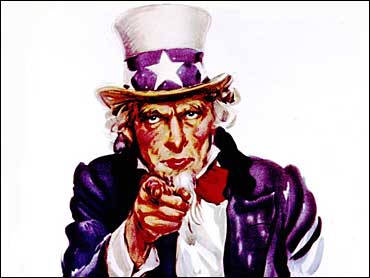 Uncle Sam might not want you, but he wants that kid you know, and he'd like you to put in a good word for him.

The U.S. military Thursday launched a new advertising campaign aimed at getting more recruits, but one directed at adults rather than youths.

The campaign's print ads, television spot and new website hope to "strengthen the personal bond between adult Americans and their military," according to a Pentagon statement. The idea is that adults will then be more likely to recommend military service to young people in their lives.

The aim is "to position service as a branded ingredient of living a successful life," he said.

The timing of the campaign is unrelated to immediate needs or current events. The military is meeting its recruiting targets, and the war in Iraq is not expected to affect recruiting in any substantial way.

Instead, the $1.7 million campaign is targeting longer-term trends, its designers say: the dwindling number of Americans who have military experience and the general unwillingness of adults who suggest that youths sign up.

According to statistics from the Bureau of Economic Analysis, there were 2.3 million people employed by the military in 2001, the last year for which figures are available. That's down from 3.3 million as recently as 1987, and from the post-World War II high of 4.6 million in 1968, at the height of the Vietnam War.

Because of population growth and a shrinking armed force, the percentage of Americans in the military hit a post-World War II low in 2001. About one in 125 Americans were in uniform that year.

Even the number of people who've left the military is shrinking: The number of veterans fell 4 percent from 1990 to 2000, according to census figures, a trend that's expected to continue.

"There used to be more of a tradition of military service that's passed down generation to generation," said a Pentagon spokeswoman who asked not to be named. That tradition is ebbing, "so we need to reach out to other influencers."

The fact that the largest group of veterans served in the Vietnam War also poses challenges. Because of the controversy surrounding the war, Allegretti said marketing experts have told him that Vietnam vets "might be reluctant to recommend service because perhaps they're at odds with their past."

Polls show that Americans respect the military and admirer those who serve but are unlikely to suggest a military career to their own children or kids close to them.

"Only 11 percent of adults recommend service to youth in their life. That obviously needs to change and to grow," said Joyce McMahon of Mullen, the firm designing the campaign.

The pitch to adults began after a marked fall-off in the military's recruiting success that saw the Army, Navy, and Air Force miss their targets at least once from 1998 to 1999.

An earlier campaign used slogans like "He's Not Just My Son, He's My Hero" and featured what Allegretti called a "proud parents, bright future kind of setting."

There's also a website, www.TodaysMilitary.com. It features personal stories from soldiers and sailors and testimonials by employers on why they hire service veterans.

The site also describes the benefits, educational assistance and job training offered to recruits. There are photo essays about life in the ranks — one section of off-duty activities talks about the "seriously good time" military members have.

Noting that "less than 45% complete their college education after 5 years," the site suggests that signing up might be a better idea for some kids than rushing into college.

"We recognize adults, parents in particular, have hopes and dreams and ambitions for their children, and they project outward in the hopes that they'll be successful one day," said Allegretti.

"Our hope is to show that 'one day,'" he said, in which the children are successful adults, out of the military and succeeding in professional life.