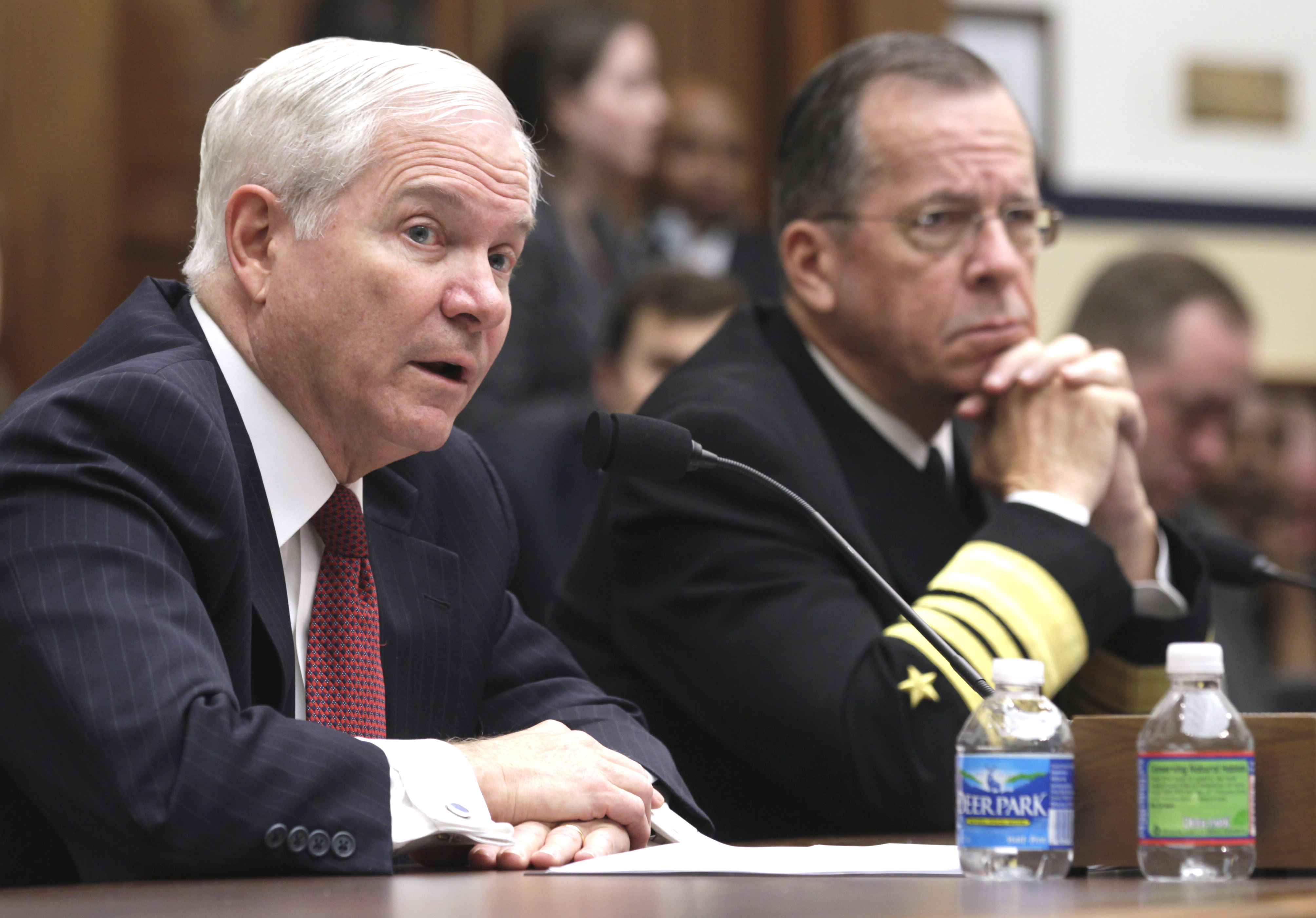 WASHINGTON - As the U.S. debates its future role in the Libyan conflict, defense officials slammed the brakes on any broad participation Thursday, with Defense Secretary Robert Gates saying there will be no American ground troops in Libya "as long as I am in this job."

Under withering congressional probing and criticism of an ill-defined mission to aid a rebel force that officials know little about, Gates and Joint Chiefs chairman Adm. Mike Mullen sketched out a largely limited role for the U.S. military going forward, with Gates saying some other country could train the rebels trying to oust strongman Muammar Qaddafi.

Complete coverage: Anger in the Arab World
White House: U.S. no longer in lead on Libya

"My view would be, if there is going to be that kind of assistance to the opposition, there are plenty of sources for it other than the United States," said Gates. "Somebody else should do that."

Asked by one lawmaker whether the U.S. involvement might inevitably mean "boots on the ground" in Libya, Gates replied, "Not as long as I am in this job."

The U.S. turned over control of the military operation to NATO Thursday, just hours before Gates and Mullen told Congress that future U.S. participation will be limited and will not involve an active role in airstrikes as time goes on.

They were unable; however, to answer key questions from clearly agitated lawmakers about the length of the operation and how it will play out if Qaddafi does not relinquish power.

The U.S. goals are unclear and officials don't know who the rebels are, said Rep. Mike Turner, R-Ohio, adding that if it came to a vote he would not support U.S. involvement in the operation.

CIA likely in Libya to vet rebels, ID targets
CIA links up with rebels in Libya

He and others repeatedly complained that Congress has not been consulted on the Libya operation, and chafed that the legislative branch is not willing to be a backseat driver.

Gates and Mullen insisted that Qaddafi's military has been degraded by as much as 25 percent, but Mullen noted that regime forces still outnumber the rebels by about 10-to-1.

Meanwhile, they said the opposition groups are fractured and operating independently city by city, and just 1,000 of the rebels are militarily trained.

Their comments came as Qaddafi's forces struck forcefully back at the rebels this week, recapturing lost ground and triggering pleas for help from the battered and failing opposition forces.

Gates said that he believes political and economic pressures will eventually drive Libyan leader Qaddafi from power, but the military operation will help force him to make those choices by degrading his defense capabilities.

Gates and Mullen testified before the House and Senate Armed Services Committees in the wake of new revelations that small teams of CIA operatives are working in Libya.

Gates declined to comment on the CIA activities in Libya.

Arming Libya's rebels would be a tricky gamble

U.S. officials have acknowledged that the CIA has sent small teams of operatives into Libya and helped rescue a crew member of a U.S. fighter jet that crashed.

The CIA's precise role in Libya is not clear. Intelligence experts said the CIA would have sent officials to make contact with the opposition and assess the strength and needs of the rebel forces in the event President Barack Obama decided to arm them.

The administration says there has been no decision yet about whether to arm the opposition groups, and acknowledged that the U.S. needs to know more about who the rebels are and what role terrorists may be playing there.

The composition of the rebel force is complex and largely unknown -- a situation contributing to the role CIA in Libya, which likely includes assessing rebel loyalties. As a country of sometimes opposing tribes and distinct regions, Libya in some ways resembles Iraq and Afghanistan, where disparate factions have complicated the nearly decade-long U.S. involvement.

"We don t have any influence or particular sway with the tribes," Gates said.

Gates put the cost of the U.S. involvement there at about $550 million so far, with an ongoing "run rate" at $40 million a month now that NATO has taken control of military operations.

Rep. Adam Smith of Washington state, the top Democrat on the House Armed Services Committee, said the U.S. must better explain to the American public that this is not an open-ended conflict and that the U.S. will not become embroiled in a civil war.

"History has demonstrated that an entrenched enemy like the Libyan regime can be resilient to airpower," McKeon said.

Gates reiterated many of the policy positions regarding Libya put forth by President Barack Obama in his speech to the nation on Tuesday and by other members of the administration in recent weeks.

While Qaddafi's ouster is desirable, the military mission "does not include regime change," Gates said.

"Personally I felt strongly about that. We've tried regime change before, and sometimes it's worked and sometimes it's taken 10 years," he said in an apparent reference to Iraq, where the U.S. has incurred "enormous human and fiscal cost[s]."