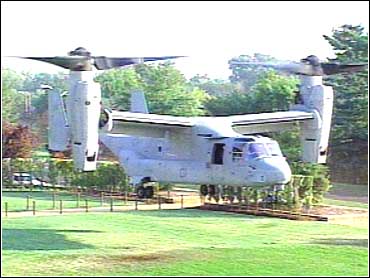 Mechanical failure has been ruled out as a cause of last month's MV-22 Osprey airplane crash that killed 19 Marines, and the remaining aircraft in the fleet will resume flying this month, officials announced Tuesday.

One early-model Osprey, used for test flights, is expected to fly from Nova Scotia to Maryland on Wednesday to join another for flights to simulate some of the conditions under which the fatal crash occurred, Lt. Gen. Fred McCorkle said. No Osprey has taken to the air since the accident in Arizona on April 8.

McCorkle, speaking at a Pentagon news conference, said he expected the rest of the fleet to resume normal flying within two weeks.

"We see no problems whatsoever with the aircraft," McCorkle said.

In stating that no mechanical, structural or engineering flaws have been found by investigators, McCorkle said, "We're rock solid on that."

Gen. James L. Jones, the Marine Corps commandant, said in an interview Tuesday that he believes the Osprey fleet can safely resume flying with no redesign of the hybrid craft - part propeller plane and part helicopter.

"I feel confident we can put them back in the air," Jones said. "Everything appears to have been working normally" at the time of the accident.

Jones and McCorkle said investigators have concluded that the crash was caused by a loss of aerodynamic lift that forced the aircraft into a fatal nose dive as it was about to land. The Osprey descended too rapidly toward the airport at Marana, Ariz., on the night of April 8, Jones said, and by the time the pilot apparently attempted to pull the aircraft to the right and regain lift in the final seconds of flight, it already was doomed.

It is not yet clear why the Osprey was descending at excessive speed, Jones said. He said it was up to investigators, who have not yet completed their work - to determine whether pilot error was involved. Other officials said there is no evidence of recklessness by the pilot, Maj. John A. Brow, of California, Md.

Jones said there was no distress call from the aircraft.

All 19 Marines aboard the aircraft were killed; it was the worst aviation disaster for the Marines since 22 were killed in a helicopter crash in South Korea in 1989.

As a gesture of confidence in the aircraft's airworthiness, Jones said he and Air Force Chief of Staff Michael Ryan plan to be passengers aboard the first Osprey to return to operational flight. Although the Osprey is being produced mainly for the Marines, the Air Force plans to buy some for special operations.

The tilt-rotor Osprey takes off and lands like a helicopter but flies likan airplane.

Jones said families of the 19 victims, as well as members of Congress, have been informed of the investigation's progress.

Jones said investigators determined that the crash was caused by an aerodynamic phenomenon known as "power settling."

This condition, also known as "vortex ring state," occurs when a helicopter settles into the air turbulence - called wash - produced by its own rotor system. This can happen in circumstances combining a low forward airspeed with a nearly vertical rapid rate of descent.

In the case of the Osprey, the rotors may have been using such a large proportion of available engine power that the aircraft had insufficient power left to slow the rate at which it was sinking in its rotor wash.

It is not clear what caused the Osprey to get into the "power settling" problem.

Investigators have accumulated evidence from a combination of sources, including interviews with members of the crew of an MV-22 Osprey that landed at the same airport just moments before the crash. A member of that crew reported seeing the Osprey nose-dive into the ground as he looked behind him.

Court rules 16-year-old not "mature" enough to get an abortion
Thanks for reading CBS NEWS.
Create your free account or log in
for more features.
View CBS News In
CBS News App Open
Chrome Safari Continue
Be the first to know
Get browser notifications for breaking news, live events, and exclusive reporting.