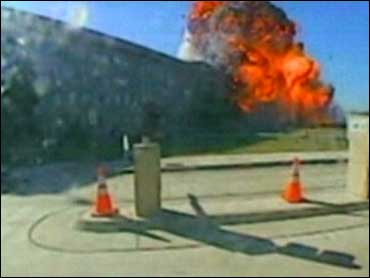 The Defense Department on Tuesday released the first video images of American Airlines Flight 77 crashing into the military headquarters building and killing 189 people in the Sept. 11, 2001 terrorist attacks.

The images, recorded by Pentagon security cameras outside the building, were made public in response to a December 2004 Freedom of Information Act request by Judicial Watch, a public interest group.

The video and isolated images had previously been leaked and circulated on the Internet.

The airplane on the video is a thin white blur skimming close to the ground before it slams into the Pentagon at ground level. Almost instantly a white flash and a huge orange fireball appear on the video, followed by a tower of gray-black smoke.

One of the videos shows a Pentagon police car driving in the direction of the impact point shortly after the plane hit.

Traveling at an estimated 530 mph, the hijacked American Airlines plane plowed into the southwest side of the Pentagon at in mid-morning shortly after two other hijacked airlines were flown into the twin towers at the World Trade Center in New York.

The attack set off fires in a portion of the Pentagon and killed 125 people inside, in addition to the 59 passengers and crew and the five men who hijacked the plane at Dulles International Airport.

But Fitton said he hopes the video ends conspiracy theories that it wasn't actually American Airlines Flight 77 that hit the building.

He said dispelling such rumors is a way to honor the memory of the victims, adding that so many people are looking for the video that his group's Web site has collapsed.

The government had previously withheld the video, claiming that it might taint the jury pool in the sentencing trial of confessed 9/11 conspirator Zacarias Moussaoui, CBS' Bianca Solorzano reports. The tape had been provided to the Justice Department as evidence in criminal proceedings, the Pentagon said.

Now that Moussaoui's trial is over, some families of 9/11 victims are seeing the Pentagon video for the first time. As Solorzano reports, at least one family member is saying he's satisfied with the release of the tape.

"We fought hard to obtain this video because we felt that it was very important to complete the public record with respect to the terrorist attacks of September 11," Fitton said.

Cheryl Irwin, a Pentagon spokeswoman, said families of the victims of the Pentagon attack were not consulted before the videos were released on the Pentagon's Web site.