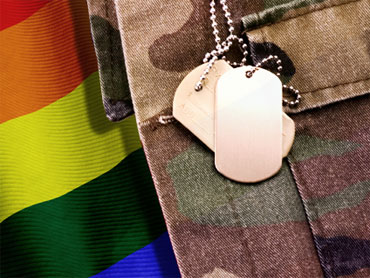 The Pentagon today strongly pushed back against an allegation from a prominent political blogger that the military could segregate gay and straight servicemembers if and when lawmakers repeal the "Don't Ask, Don't Tell" policy.

The suggestion the Defense Department or the Obama administration could allow for segregation of any kind is "absurd," a Pentagon spokesperson said.

Questions about the Defense Department's intentions stem from a controversy that started last week regarding a survey the DOD sent to 400,000 servicemembers. The survey is part of a Defense Department analysis of the impact of repealing the "Don't Ask, Don't Tell" (DADT) law, which prohibits openly gay men or women from serving in the military.

After questions from the survey were leaked, some gay veterans organizations criticized the Defense Department, saying the questions -- which related to issues like how servicemebers would handle sharing housing or bathing facilities with gay colleagues -- were biased against a repeal of DADT.

At a press briefing on Friday organized to address the concerns about the survey, Pentagon spokesman Geoff Morrell explained why those questions were included in the survey. Today, John Aravosis of Americablog, a progressive political blog with a special focus on gay rights, zeroed in on Morrell's remarks to accuse the Pentagon and the Obama administration of preparing to segregate gay servicemen and women.

Aravosis highlights this comment from Morrell: "We think it would be irresponsible to conduct a survey that didn't try to address these types of things. Because when DADT is repealed, we will have to determine if there are any challenges in those particular areas, any adjustments that need to be made in terms of how we educate the force to handle those situations, or perhaps even facility adjustments that need to be made to deal with those scenarios."

Conjuring up some of the most evocative images of the Civil Rights Movement, Aravosis writes, "The Pentagon confirmed on Friday that it is considering segregating gay troops, specifically with regards to creating separate showers and/or barracks for straight and gay troops...Why is it okay to even talk about segregating gays and lesbians? What would have happened to an Obama administration spokesman who talked about segregating blacks?"

Morrell told Hotsheet that the suggestion the survey could lead to segregation is "absurd."

"No one is talking about segregating gay servicemembers from straight servicemembers," Morrell said. "We don't know that any adjustment will have to be made, but in the event that's a recommendation from the review group, it would not result in any 'separate but equal' facilities."

Hypothetically speaking, Morell said, it is possible the military could consider facility modifications like adding shower curtains to shower stalls that are currently open.

"We don't know if any adjustments will be required, but we need to survey the force to get an idea of what their privacy concerns are," he said.

Morell said the suggestion the survey could lead to segregation is "inflammatory nonsense" from groups trying to discredit the survey, which is "not helpful" for the Defense Department.

"If the consequence is that servicemembers are reluctant, hesitant to participate in the survey, that would be very unfortunate," he said. "We need empirical data to advise the working group on what the potential challenges and what the potential opportunities are that come from a repeal."