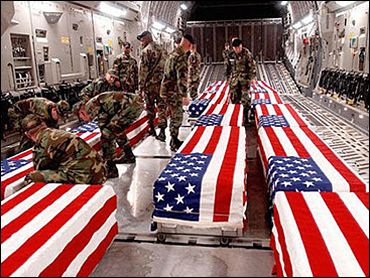 The Pentagon says the ban on images of caskets bearing soldiers, which was violated when pictures of flag-draped coffins appeared in newspapers and on the Internet this week, goes back more than ten years.

But photographs of coffins arriving during the Clinton administration and current Bush administration have been published before, a search of a photo archives reveals.

A Web site published dozens of photographs of American war dead arriving at the nation's largest military mortuary, prompting the Pentagon to order an information clampdown Thursday. Pentagon spokesman Lt. Col. Gary Keck said release of the photos appears to be in conflict with policy.

"This policy of no photos has been in effect since 1991," said John Molino of the Defense Department. "It has been tested over time and it reflects what families tell us that they would like as far as treatment of shipment of remains."

"Quite frankly, we don't want the remains of our service members who have made the ultimate sacrifice to be the subject of any kind of attention that is unwarranted or undignified," said Molino, a deputy undersecretary of defense.

However, the ban has not always been followed. An Associated Press photo archive features pictures of bodies arriving at Dover from a 1996 plane crash in Croatia, and from an accidental helicopter crash in the United States last year. An image also exists of a soldier's coffin being loaded in Mogadishu, Somalia, in 1994.

The photographs that have irked the Pentagon were released last week to First Amendment activist Russ Kick, who had filed a Freedom of Information Act request to receive the images. Air Force officials initially denied the request but decided to release the photos after Kick appealed their decision.

After Kick posted more than 350 photographs on his Web site, the Defense Department barred the further release of the photographs to media outlets.

"They're not happy with the release of the photos," Dover Air Force base spokesman Col. Jon Anderson said.

CBS News Correspondent Peter King reports President Bush has seen the photographs and the White House says he "was moved."

The photos were taken at the Dover base — home to the mortuary — and most of the images are of flag-draped cases used by the military to transport remains.

At a rally in Dover last month, war protesters criticized Mr. Bush for continuing the practice of previous administrations of not allowing the public or media to witness the arrival of remains at the base.

"We need to stop hiding the deaths of our young; we need to be open about their deaths," said Jane Bright of West Hills, Calif., whose 24-year-old son, Evan Ashcraft, was killed in combat in July.

The Pentagon move came a day after a cargo worker was fired by a military contractor after her photograph of flag-draped remains was published on the front page of Sunday editions of The Seattle Times.

Silicio took the photograph in a cargo plane about to depart from Kuwait International Airport earlier this month. She sent the photo to a stateside friend who provided it to the newspaper, which then obtained permission from Silicio to publish it.

"As a journalist, I tend to resist any sort of government restrictions on our access," said David Boardman of the Seattle Times. "When we're talking about fighting a war, I think most journalists and the public would agree that they want to see what's going on."

On NBC, Republican Sen. Lindsey Graham of South Carolina agreed with the policy banning photos from Dover because "there's no ceremony held; it's a caretaking event."

But Democratic Rep. Jim McDermott of Washington, who served in the Navy during the Vietnam War, said photos of caskets coming home from Vietnam had a tremendous impact on the way Americans came to view that war.

"As people began to see the reality of it and see the 55,000 people who were killed coming back in body bags, they became more and more upset by the war," he said. "This is not about privacy. This is about trying to keep the country from facing the reality of war."

According to the Washington Post, the Pentagon imposed the ban on images at Dover shortly before the invasion of Iraq last March, saying it continued an order from the Clinton administration in November 2000.

That 2000 directive mirrored a ban imposed in 1991, at the time of the Persian Gulf War. After the late 1989 invasion of Panama, the first President Bush complained about an incident in which three television networks (including CBS) broadcast split-screen images of the president speaking and coffins arriving at Dover. The president's remarks during the coffins' arrival were jocular, The New York Times reported.