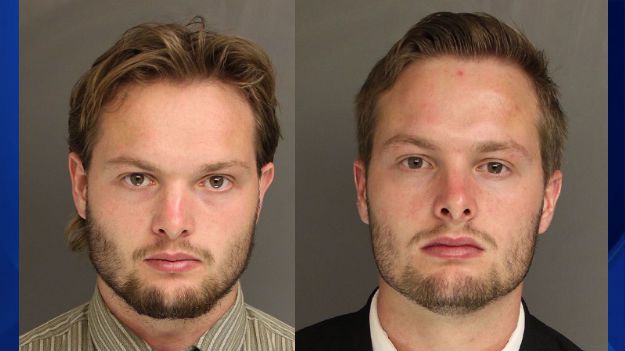 Daniel and Caleb Tate's alleged 10-day bombing spree began with a small mailbox explosion in Highland Township, on Dec. 20, 2015, according to Chester County District Attorney Tom Hogan. Then, on Dec. 22, authorities say the defendants allegedly detonated an explosive in a wooded area in Londonderry Township.

From that point, authorities say the duo escalated to detonating explosives inside buildings.

On Dec. 30, authorities say they exploded a pipe bomb in an Amish phone shed in Colerain Township, Lancaster County. The phone shed was badly damaged. One day later, authorities allege they bombed an Amish produce shed in Strasburg Township.

Later that day, they are accused of detonating another bomb in a well pump shed in West Fallowfield Township in Chester County.

Authorities say the building was destroyed. No one was in the buildings during any of the explosions, officials say.

Authorities say the bombs were made of materials that included metal pipes, fuel containers and propane canisters.

Hogan said the suspects brought "fear to our region during a two-week crime spree."

"We live in a world where the thought of bombs exploding around us is a very real fear," Hogan said.

Pennsylvania State Police and the U.S. Bureau of Alcohol, Tobacco, Firearms and Explosives investigated the bombings.

Investigators say the defendants shoplifted materials for the bombs from local stores. Authorities say they were able to match Daniel Tate's finger print from electrical tape recovered from one of the explosion scenes.

The brothers are charged with arson by explosion, arson by possession of explosive devices, conspiracy, theft and related charges.