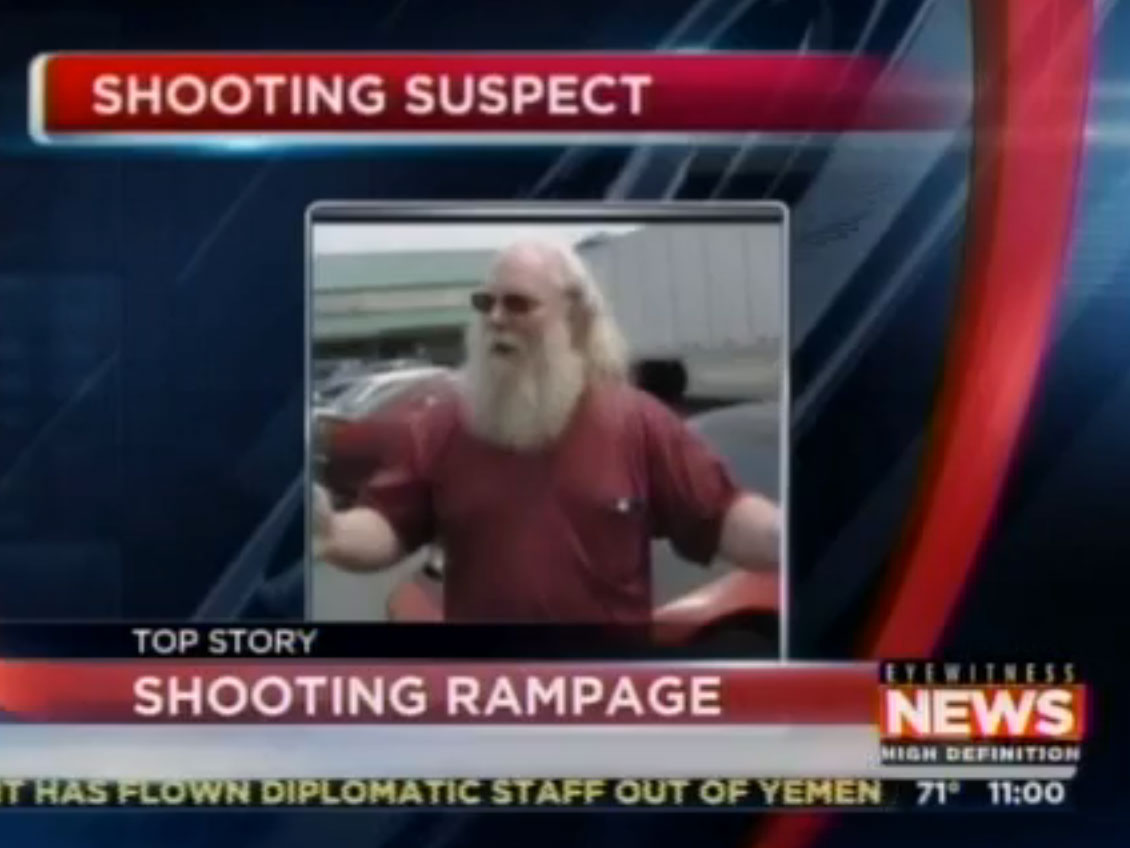 (CBS/AP) SAYLORSBURG, Pa. -- A man who police say fatally shot three people during a municipal meeting in the Pocono Mountains was about to fire more rounds when he was wrestled to the ground, possibly preventing more bloodshed, authorities said Tuesday.

The gunman, who police identified as 59-year-old Rockne Newell, was arraigned Tuesday on homicide charges and other counts. Newell indiscriminately fired shots Monday night as he barged into the meeting, authorities said. He left long enough to get another weapon from his car and continued firing upon returning until he was tackled by at least one person and was shot with his own gun, police and witnesses said.

Newell was armed with a .44 Magnum handgun and was about to shoot six more people when a resident and a township official wrestled him to the ground, Monroe County Coroner Bob Allen said at a news conference. The two people who subdued him were identified as Parks and Recreation director Bernie Kozen and resident Mark Kresh, according to state police.

Newell yelled, "You took my property!" and used expletives during the rampage, according to a criminal complaint obtained by the Pocono Record. Newell had a long-standing debate with the township over his dilapidated property, which he was ordered to vacate in 2012.

When police interviewed Newell at the hospital, he reportedly told police he had targeted the meeting because he knew the three township supervisors and the township solicitor would be together in the location.

He also told police he fully expected to die during the incident, reports the Pocono Record.

Citing police documents, Newell said, "I wish I killed more of them," as he was being taken to the hospital, Pahomepage.com reports.

State police said 15 to 18 people were at the building, a short drive from Newell's property in a rural area of northeastern Pennsylvania about 85 miles north of Philadelphia, when the gunfire erupted.

Two people died at the scene, and a third died after being flown to Lehigh Valley Medical Center. Police confirmed that at least one of the dead was a township official but gave no details. Gerard J. Kozic, 53, and James V. LaGuardia, 64, both of Saylorsburg, were pronounced dead at the scene, Allen said.

A spokesman for Pocono Medical Center told the Pocono Record newspaper that Newell and two other people injured in the shooting were released from the hospital late Monday.

State police said Newell had a long-running dispute with township officials over the ramshackle, trash-filled property. He said he lived on Social Security and could not afford to clean it.

Pocono Record reporter Chris Reber said he was at the township building Monday night when a man armed with a long gun with a scope shot through a wall into the meeting.

"The thing that got my attention: plaster flying out, blowing out through the walls. Witnesses would later tell me they saw pictures exploding away from the walls," Reber said in his account told to his editors, Marta Gouger and Chris Mele.

He said he crawled out to a hallway, exited the building and took cover behind a vehicle. A local official at the meeting grabbed the shooter and subdued him, Reber said. "(West End Open Space Commission executive director) Bernie Kozen bear-hugged the gunman and took him down," Reber said. "He shot the shooter with his own gun."

Newell's property includes an old camper in the front yard filled with wooden pallets, pieces of what appear to be old railroad ties and trash. A garage leans and appears close to collapse, and a propane tank sits inside an old dog house.

Township supervisors voted in February 2012 to take legal action against Newell for violating zoning and sewer regulations, according to meeting minutes posted online.

Last October, Newell set up a fundraising page online and was trying to raise $10,000 to pay for legal fees in his fight with the township.

"Ross township took me to court & the court ruled I have to vacate my home of 20 years," he wrote on the page called saveRockyshome. "I live on SSI which comes to $600 a month I have no money to clean it up."

In June, the Pocono Record wrote a story about what it said was an 18-year fight between the township and Newell over his property.

Authorities have responded several times to the property for neighbor complaints and found human fecal matter in buckets there in 2009, reports the Pocono Record. The township determined Newell was improperly disposing of sewage and had no permit for a septic system, reports the paper.

Monroe County Court sided with the township in August 2012 and ordered Newell to vacate and never again occupy or use the property unless he had the permits to do so. The report said Newell had been living out of a car, a 1984 Pontiac Fiero, and in abandoned buildings since being ordered to vacate.

Newell told the paper he was unemployed for years after an injury from a crash and had nowhere else to go.

"They have no right to kick me off my property," he told the newspaper. "They call my property an eyesore. When I bought it, it was one of only three properties on the entire road that didn't have what they call junk."

A spokesman for Pocono Medical Center told the Pocono Record that Newell and two other people injured in the shooting were released from the hospital late Monday.

Newell was limping as he appeared via video feed from the Monroe County Correctional Facility for the arraignment, the Pocono Record reports. At the arraignment, a judge asked Newell if he owned any real estate and he responded: "They stole it from me. That's what started all this."

He asked a judge if he would receive medical attention, reports the paper.

"I got a .44 slug on my leg. Hospital says it's still in there. They gave me no pain medication and sent me on my way. I'm bleeding all over the place," he reportedly said.