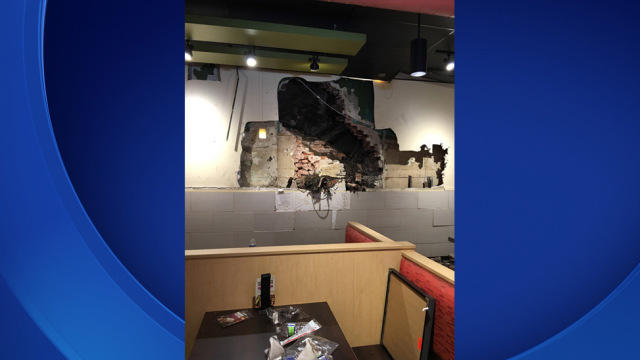 It all started around 2 a.m. on Forbes Avenue, reports CBS Pittsburgh

Police say the man met a woman at a nearby establishment and took her up to a building rooftop.

In an effort to impress her, police say the man attempted to jump from one rooftop to the next. He missed and instead ended up wedged in between the buildings.

“He is not quite on the ground. But, he is wedged between these two buildings pretty well,” Pittsburgh Public Safety Officer Sonya Toler said.

Crews were at the scene for more than three hours working to free him. The man was finally rescued around 6 a.m.

Crews removed bricks and went through the wall at the Qdoba restaurant.

“We had people on the roof. One of the paramedics did rappel down three stories to render assistance and also provide us some landmarks as to where he was. Once the paramedic was there we reassessed where he was and cut the second hole,” Pittsburgh Public Safety Director Wendell Hissrich said.

Forbes Avenue closed between Oakland Avenue and Atwood Street during the rescue.

The man reportedly has an injured ankle. He has not been identified, but he is believed to be a Pitt student.