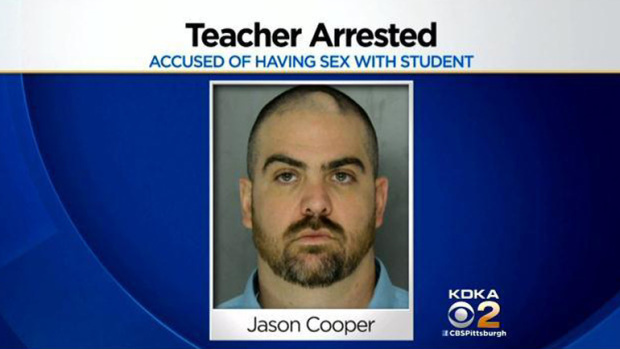 PITTSBURGH - Jason Cooper, a 38-year-old a chemistry teacher at a high school near Pittsburgh, was charged Thursday with institutional sexual assault, corruption of a minor and providing alcohol to a minor in connection with his alleged relationship with an 18-year-old female student, reports CBS Pittsburgh.

According to the station, the criminal complaint says another teacher at Plum Senior High School overheard a student talking about tweets between Cooper and a high school senior. When police questioned the girl, she said she began having conversations with Cooper in late November or early December, during school hours. She says those chats led to phone conversations after school hours, and on Twitter, reports the station.

The complaint also says she visited Cooper at his home in Plum Borough right before Christmas where Cooper gave her alcohol and she spent the night, reports the station. She says they kissed a few times, once in his classroom when no one else was around, and admitted to having sex with Cooper at his home.

"If Mr. Cooper and this girl did have a sexual relationship after she turned 18-years-old, as immoral as people may judge and feel, it's not an illegal relationship," Cooper's attorney, Michael DeRiso, said.

Meanwhile, school officials and police are investigating a second possible case involving a teacher and a female student, reports the station. This information came out during Cooper's investigation. The school posted a letter on the district's website Friday addressing the situation. Both teachers have been removed from the school, according to the station.