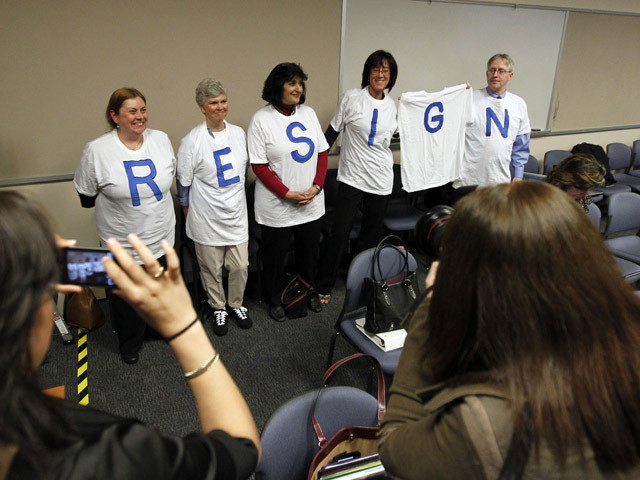 The steps outlined to university trustees Friday by school President Rodney Erickson focused on areas such as the prompt reporting of allegations and a new compliance offer. They were initially put forward by Freeh, who's heading the trustees' internal investigation into a child sex abuse scandal involving former assistant football coach Jerry Sandusky.

The details came amid what proved to be another busy legal day in the case against Sandusky. The school's lawyer said that a number of Penn State employees had received subpoenas from the state attorney general's office, while Sandusky's lawyer told a judge he needs psychological reports, juvenile arrest records and other documents about his client's accusers to prepare for trial.

Erickson said he knows the names of some of the staffers who received subpoenas. He declined to release their names but said at least a half-dozen people got them, ranging from senior officials to low-level staffers. He said he wasn't subpoenaed, and trustees chair Karen Peetz said she hadn't heard of trustees being subpoenaed, either.

The school wasn't officially notified of the subpoenas; instead leaders found out after recipients contacted the school's general counsel. They were advised to get their own lawyers, Peetz said.

"We expected it, knowing that there was an (investigation) going on. ... No one was alarmed," Peetz said. "We expect this will take some time to play out."

The university, embroiled in the scandal since Sandusky's arrest Nov. 5, is trying to move forward while still dealing with the legal implications that keep refocusing attention on the past. Some vocal alumni remain angry with the board's actions in the frantic week that followed Sandusky's arrest, including the ouster of the late Hall of Fame football coach Joe Paterno and then-school President Graham Spanier.

Peetz said people related to the school have been dealing with "an enormously emotional issue."

"As people get their heads around it in their own individual way, what we're hoping is that we can move forward together," she said.

University leaders have said they hope the Freeh-inspired guidelines confirm their dedication to addressing head-on questions and research about child sex abuse. Changes include enhancing background checks for staffers working with children and adding employees to help with compliance with various federal laws and NCAA rules.

Erickson said Penn State will immediately retrieve keys, access cards and other property from people who are no longer formally associated with the university. Sandusky had a key to the football building long after his 1999 retirement. The results of Freeh's investigation are expected later this year.

The 32-member Board of Trustees will now have five committees instead of three. A couple of existing committees were combined, while new groups will focus on outreach and development; governance; and risk, legal and compliance.

"These are positive things happening (out of) a major negative," trustee Joel Myers said. "A lot of effort has gone into that."

It didn't seem to please several members of the group Penn Staters for Responsible Stewardship, who each donned white T-shirts with one blue, bold letter that together spelled out the word "RESIGN" from in the back row of a conference room at Penn State Hershey Medical Center.

Former running back Franco Harris, a vocal critic of the board's decision to fire Paterno, raised his hand to ask a question but was not called on. He left early.

The board has said it ousted Paterno because he should have done more after learning of an allegation of sexual assault involving Sandusky. Harris said he found it disrespectful and "very, very disturbing" that the board failed to note Paterno's death during its first gathering since he died on Jan. 22.

In the criminal case, Sandusky attorney Joe Amendola filed a 17-page response that said several of his client's accusers used drugs and alcohol as juveniles, which may have affected their memories and could be used to challenge their testimony.

He also asked Judge John Cleland to order the release of a psychologist's report related to a person described as Victim 6 in a grand jury report because he believes it contains a conclusion that the boy wasn't sexually abused by Sandusky.

The grand jury said Victim 6's mother complained to authorities when he came home with wet hair after showering with Sandusky in 1998. The subsequent investigation by Penn State police did not result in any charges being filed at the time.

A spokesman for the attorney general's office declined to comment on the filing by Amendola.

The sides are battling over what must be disclosed before Sandusky's trial on 52 counts, and Amendola said prosecutors should not be able to shield records through the secretive grand jury process.

"If the commonwealth can conceal evidence by presenting it to a grand jury, the temptation to abuse the grand jury practice will increase significantly," Amendola wrote.

Sandusky, 68, is confined to his home as he awaits an expected mid-May trial. He has denied the allegations he abused 10 boys over a 15-year period, including at his State College home and in university athletic facilities.