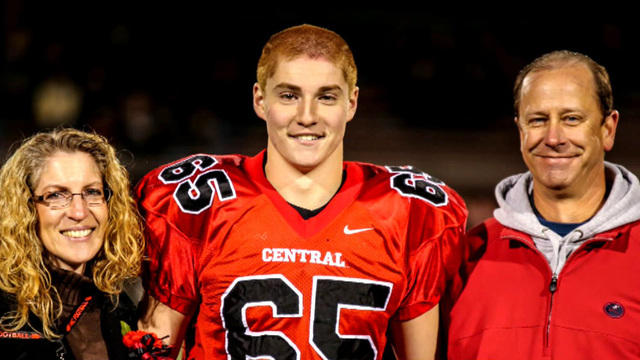 Beta Theta Pi at Penn State University is suspended after the death of a student. Police say 19-year-old Timothy Piazza was found unconscious inside their fraternity house Friday morning. The coroner ruled his death accidental. Investigators are now looking for video evidence from inside the house.

Timothy Piazza just recently joined the ranks of the“Men of Principle at Beta Theta Pi fraternity. Frat members told police and paramedics on Friday morning the teen plunged down the basement stairs the previous night, and that their call for help came about 12 hours after his fall, reports CBS News correspondent Jericka Duncan.

The sophomore partied inside the Beta Theta Pi fraternity house Thursday night. At 10:49 Friday morning, State College Police responded to a call for help, where they say: “Fraternity members reported that Piazza, while intoxicated, had fallen down basement stairs around 11:00 p.m. on Thursday.”

But Piazza was not found at the foot of the stairs. Police said he was lying unconscious on a couch on the main level of the home.

“We’re in the process of obtaining video of inside the fraternity and we are working closely with Pennsylvania Office of Student Affairs,” said Lt. Keith Robb of the State College Police.

In a statement to “CBS This Morning,” Jim Piazza, Tim’s father, said investigators were looking into what he called “this fraternity pledge/hazing event.” He also said: “Tim was an amazing son, an amazing person and someone who we are going to miss dearly.”

Alpha Upsilon, Beta Theta Pi’s Penn State chapter, said that Piazza “recently accepted an invitation to join.” The national branch told “CBS This Morning” that “as a matter of fraternity protocol, the chapter’s operations have been temporarily suspended until the investigation has completed.”

In his native New Jersey home, Piazza’s friends are choosing to remember the light that he brought to their lives.

Penn State University told “CBS This Morning” their office in charge of the school’s fraternities has told the chapter it cannot host or participate in campus activities. Administrators will be looking into whether the fraternity violated codes of conduct.