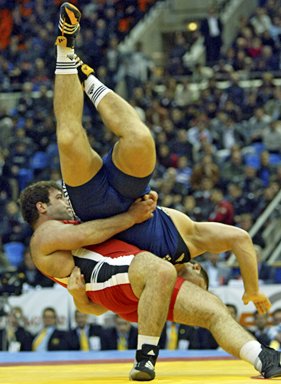 The Washington Capitals knew it had to end sometime. They just wish it hadn't ended this way with too many breakdowns and too many Pittsburgh breakaways.

The Capitals took 15 shots in the first period, then managed only 12 more against Jean Sebastien-Aubin in their first loss since a 3-1 defeat to Atlanta on Jan. 6. They were 10-0-1 since then, improving from three games under .500 to seven games over.

"It was fun. We were rolling like a snowball," said Peter Bondra, who assisted on both Washington goals. "We were trying to catch the teams that before Christmas were 20 points ahead of us. Now, we've closed the gap."

So have the Penguins, who found themselves slipping out of playoff contention during a 1-7-1 slide. But they have since scored one-goal victories in successive nights, winning 2-1 Monday in Atlanta on Robert Lang's overtime goal.

"We couldn't play any worse than we've played lately," said NHL scoring leader Jaromir Jagr, who had two assists. "We knew we had to rebound, and we had to do it quickly."

Lang scored again Tuesday and Jan Hrdina assisted on both of Straka's goals as the Penguins beat the Capitals for the eighth time against a tie in Washington's last 10 games at Pittsburgh.

The Capitals made it 2-2 on Adam ates' eighth goal at 10:22 of the third. But Straka restored the Penguins' lead by taking Jagr's pass on a 2-on-1 break and putting it between Olaf Kolzig's pads from the high slot at 12:41.

"We know we've got to pick it up right now," Straka said. "He (Jagr) is playing unbelievable right now, and he's giving us a chance to win."

Kolzig said, "Any time you've got Jagr and Straka on a 2-on-1, chances are they are going to put it in the net and they did. But I should have had it. It's a play I work on in practice all of the time."

Jagr, who assisted on each of the Penguins' last two goals, played his regular shifts despite badly bruising his left thumb Monday in Atlanta. But Penguins defenseman Peter Popovic left after breaking his left index finger blocking a shot late in the second period.

Straka had given Pittsburgh a 1-0 lead in the first period with his 10th goal of the season, a backhander on a breakaway set up by Hrdina's perfectly placed pass. Hrdina also assisted on Straka's second goal.

The Penguins held NHL player of the week Sergei Gonchar to one assist he has 10 goals and 23 points in 14 games as they tightened up defensively after Aubin kept them in the game in the first period. He turned away 25 of 27 shots, one night after starting goalie Tom Barrasso beat the Thrashers.

The Penguins, 7-1 losers to Anaheim on Saturday in their last previous home game, twice lost leads but rebounded to retake the lead each time.

Washington made it 1-1 at 17:35 of the first as Bondra grabbed his own rebound and fed it across the crease to Andrei Nikolishin for his seventh goal.

Pittsburgh regained the lead at 2-1 in the second period as Lang one-timed Brad Werenka's across-the-slot pass from the right circle by Kolzig, who stopped 19 of 22 shots. The goal was Lang's 16th.

The Capitals spent much of the second period killing off four Pittsburgh power plays. Neither team scored with the man-advantage, with the Penguins going 0-on-6 on the power play and the Capitals going 0-4.

"In the second period, we lost our discipline and took some bad penalties," Capitals coach Ron Wilson said. "We can't keep serving up power plays to Pittsburgh like that."

Bondra also assisted on the Capitals' tying goal in the third period, as Oates, stationed just to the right of Aubin, put his stick on Gonchar's shot from the left circle.

The Capitals were 4-0-1 in their previous five road games, their longest run since an eight-game uneaten road streak during the 1988-89 season.

"We've got to start a new streak now," Bondra said.