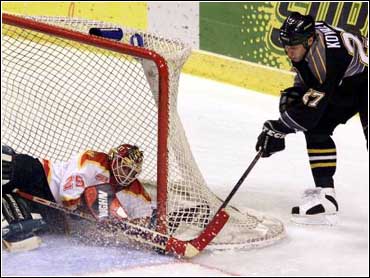 While much of the pregame hype focused on the Pavel Bure-Jaromir Jagr matchup, it was Martin Straka who stole the spotlight.

Straka scored the eventual game-winning goal early in the third period to lift the Pittsburgh Penguins to a 2-1 victory over the Florida Panthers on Saturday night.

Straka, a former Panther, redirected Ian Moran's slap shot from the point past Vernon for a 2-1 Penguins lead 29 seconds into the period. Straka played for the Panthers from 1995-97 before being released on July 4, 1997.

"I don't care if we played the Panthers or someone else," Straka said. "We need points. I don't remember when we won the last game on the road."

Aleksey Morozov also scored for the Penguins, who are 6-1-1 in their last eight.

The Panthers were 0-for-5 on the power play.

Jaroslav Spacek scored for the Panthers, who had their four-game home winning streak snapped in front of their first sellout crowd of the season. Jean-Sebastien Aubin, filling in for Tom Barrasso who is on an extended leave to be with his ailing father, made 21 saves to improve his road record to 2-10.

In a highly publicized matchup of the NHL's top goal scorers neither 28-year-old All-Star notched a point. Both took four shots in the second period.

"It's the Penguins against the Panthers," said Bure, downplaying the matchup. "I was right. I ha three chances in a row, but the puck wouldn't go in."

The Panthers came close to tying it twice in the last two minutes. With 1:52 remaining, a shot from the point caromed off Rob Niedermayer's skate and off the post. Then, with Vernon out of the net, Aubin stopped Scott Mellanby in the final minute.

"The big goal by Marty at the start really gave us something to tee on," Penguins coach Herb Brooks said. "It's good to get a point on the road, looking at our road record. I think this was our most focused and tenacious game."

Spacek's slap shot from the top of the left faceoff circle beat Aubin to the glove side for a 1-0 lead at 3:41 of the first period.

At 8:11 of the first, Morozov took a centering pass from Alexei Kovalev and flicked it in to make it 1-1. It was Morozov's ninth goal, and third in his last five games.

"It was a disappointing loss for us, there's no question," Panthers coach Terry Murray said. "The score wasn't an indication of the game, Vernon has to make almost 20 stops in the first period to keep us in there."

Aubin made a big save on Ray Sheppard during a third-period power play and also gloved Peter Worrell's deflection to preserve the win.

"I like playing against him (Bure)," Aubin said. "For now, it's just lucky, but I feel pretty good."

Matthew Barnaby sat out the third game of his five-game suspension for his participation in an off-ice scuffle with the New York Islanders' Eric Cairns.