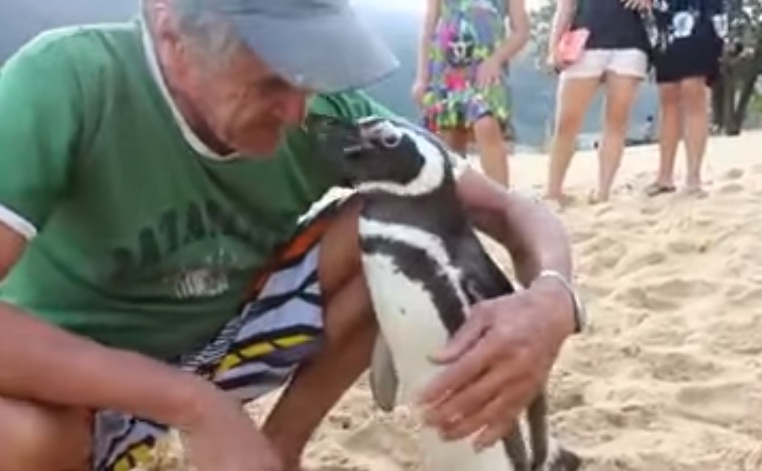 Who knew a penguin could take the title of man's best friend?

But that is just what a Brazilian man has found with a little Magellanic South American penguin nicknamed Dindim.

Joao Pereira de Souza a 71-year-old retired bricklayer, found Dindim off the coast of Rio de Janiero covered in oil and starving on a beach. De Souza nursed the penguin back to health. And they formed an inseparable bond.

As the Wall Street Journal reported in October, Dindim disappears into the ocean for months at a time. But for the last four years, the penguin has been coming back to see De Souza, the man who saved his life.

It is believed Dindim travels thousands of miles to visit De Souza. Magellanic South American penguin's are known for migrating thousands of miles each year. According to the WSJ, they migrate between breeding colonies in Patagonia and feeding grounds further north. Despite their reputation as cold water animals, the birds have been known to turn up in the warm waters of Brazil.

He was first set to graduate in 1945. He's now getting a diploma
More

De Souza said everyone told him the penguin wouldn't return after he first left, but he continues to come waddle back to De Souza's home. He arrives in June and leaves again in February, the Independent reported.

"He becomes more affectionate as he appears even happier to see me," De Souza said.

Biologist Joao Paulo Krajewski, who interviewed De Souza for Globo TV, told The Independent he has never seen anything like this before.

"I think the penguin believes Joao is part of his family and probably a penguin as well," he said. "When he sees him he wags his tail like a dog and honks with delight."