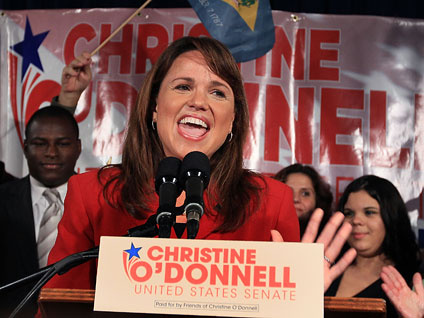 Delaware's Republican Senate candidate Christine O'Donnell has an "obligation" to explain her past remarks that she "dabbled into witchcraft," Republican Rep. Mike Pence (Ind.) said this morning.

However, Pence dismissed the attention O'Donnell has received for her decade-old comments as "typical nitpicking." O'Donnell's campaign, along with that of other Tea Party-backed candidates, is "less about the messenger [and] more about the message," he said on ABC's "Good Morning America."

"What is bringing everyday Americans into the street, out to Tea Party rallies and town hall meetings is the realization that our government has run off the rails," Pence said. "The American people recognize they've got to take back the reins of our government."

"In southern Delaware, where there are a lot of church-going people, they're probably going to want to know what was that all about," Rove said on "Fox News Sunday."

So far, O'Donnell has brushed off the remarks, as well as Rove's criticism, joking on Twitter, "I did comment that if I were a witch, Rove would be a supporter. I would have turned him into a 'Newt', because Gingrich says we win."

CBS News political analyst John Dickerson said on "The Early Show" that however old O'Donnell's past remarks are, they are still a distraction and "a barrier between her and trying to tell voters what she actually believes."

"In Delaware, a blue state, she's going to have to convince independent voters outside of the Tea Party group that has already elected her, and so this is going to give them some questions about her," he said.

Dickerson said that the "victim card" is "a bit of a time-honored technique and it works with your supporters, who are apt to believe what you say." However, he added, "If you're trying to get to voters in the middle or independents... they're not going to take it at face value that you are a victim and rally to your side."

Gallery: Controversial Statements by O'Donnell and Other Tea Party Candidates