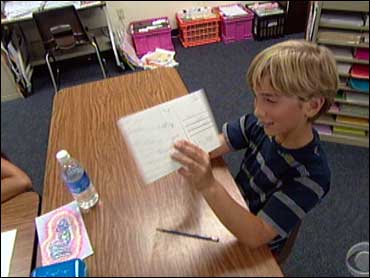 Pen pals - thanks to technology, chat rooms and social networking - are slowly becoming a thing of the past. But not for the kids you're about to meet. They're keeping it alive - for very good reason, CBS News correspondent Steve Hartman reports in Assignment America.


"We want to know eight divided by two is what?" second grade teacher Amy Frueh asked her students. "You have a couple minutes."

"The entire day will be like, 'Can we get our pen pal letters now? Please can we? Now? Right now,'" Bentley said.

For those of you too young to remember the concept - here's how it works.

"First get assigned a pen pal and then we write letters to each other back and forth," one kid says.

Why don't they just talk on the phone?

"Well we don't have phone numbers and besides that would kind of ruin the pen pal thing," a student explained.

The schools involved are Westpark Elementary, where Bentley teaches, and Culverdale Elementary, where Freuh works. They're in Irvine, Calif., about a mile apart. The two classes traded letters all year - until a few weeks ago, when the kids finally got to meet their pen pals at a picnic.

And that was the official end of the assignment. Now it's time for them to keep up their friendships - and many will - because they already know the second half of the story.

Hartman asked the classes: "How many people remember how Ms. Frueh and Ms. Bentley met? Do you remember?"

Nineteen years ago, Bentley was a second grader herself at Westpark. Freuh - a second grader at Culverdale. And, yes, they were pen pals. They traded letters all the way through high school.

Today, they're best friends - teaching the same classes at the same schools they were at when they met.

"I just can't believe that everything fell into place the way that it did," Freuh said.

The kids can't believe it either … friends since 1991.

"Yeah, that was before they invented cars, they had to use wheels and horses," one student said.

Another said: "And boys had to wear skirts."

Fortunately, there's an even better lesson to be learned here - a lesson about friendship that pen pals like Alexander Doan and Mitchell Rogers are already taking to heart.

After their meeting at the picnic, two of the boys made a commitment.

"Do you think you guys will be friends?"