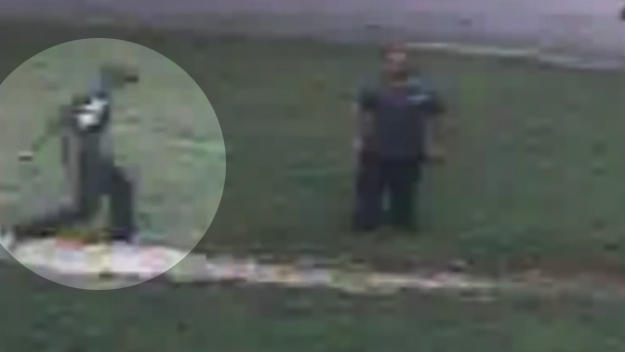 BROWARD – New surveillance video could be the break investigators need to find the killer of a man who stuck up for an elderly worker being berated, CBS Miami reports.

A surveillance camera at Phil & Lou's Complete Auto Repair in Pembroke Park was rolling last Friday at 8:59 a.m. A black man with a distinctive walk and distinctive markings on his clothes is seen walking past the business. The video shows the man berating an elderly man who was mowing the lawn outside the Marathon gas station next door.

A camera at the gas station captured Phil Antonino, the part-owner of the auto repair business, leaving the gas station store and confronting the man, sticking up for the elderly worker. Seconds later, after Antonino and the man stood toe-to-toe, arguing, Broward Sheriff's Office detectives say the man shot and killed Antonino. A camera at Antonino's business just a few feet away captured the killer jogging away in the direction he came from just over a minute after he first walked into the camera's view.

Mike Brown worked for Antonino. He respected and loved him, like many of the people who've stopped by the business to pay their respects since Friday.

"Most grown men I've seen crying in my whole life," Brown said. "They're all broken-hearted. Nobody thought he would go out like that."

There are a few flower arrangements at the site of the murder. And by all accounts, the measure of this man was in the number of people he helped and lives he touched.

"He would help anybody that asked for it," Brown said. "He's been like a father and a best friend (to me) all wrapped up in one."

What shocks Antonino's friends most of all is the sheer senselessness of this killing.

"Nine o'clock in the morning, broad daylight, you're gonna whip out a gun and shoot somebody? It's just not supposed to happen," Brown said.

There will be a memorial service for Antonino on Tuesday and he'll be laid to rest on Wednesday. On Friday, we spoke with his wife, Anna. The words she spoke to us then resonate now about the importance of catching this man and getting him off the streets.

"I want this guy to be punished," she said. "He took the life of nice, decent, hardworking, American citizen. This can't happen over and over and over again. We should be able to walk in the streets freely and not to fear each other."

To add to this family's grief and suffering, Antonino's mother died in Italy a few weeks ago. Now, Antonino's family is dealing with another loss. Antonino's brother and co-workers tell me they hope to put together a sizable reward in the coming days for information that leads to an arrest.

If you know anything about this murder or if you know who the killer is, contact Broward Crime Stoppers at (954) 493-TIPS.