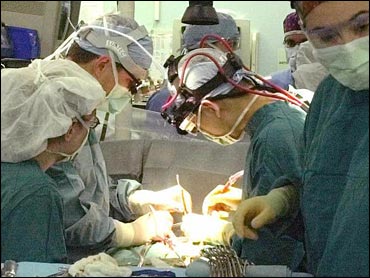 Some of the nation's leading medical schools have abandoned a little-known, decades-old practice of letting students perform pelvic exams on women without their consent while they are under anesthesia.

The schools are asking permission first.

Previously, these institutions had routinely brought in students - sometimes as many as three or four - to conduct pelvic exams on unconscious women just before their gynecological surgeries and often without their consent.

Changes in that practice have taken place over the past five years after complaints from students who felt the exams without consent were unethical.

"My problem was that if they found out about it, they might be really upset, and it was really only being done for my benefit," said Dr. Ari Silver-Isenstadt, who refused to examine anesthetized women as a student at the University of Pennsylvania.

"I felt like I would be violating their trust," he said.

Dr. Daniel Federman, senior dean for clinical teaching at Harvard, said the complaints led to a new policy under which surgical patients had to give consent for a pelvic exam for training purposes. In addition, the students had to be part of the medical team.

"Very few patients decline. And when they do, we honor it," Federman said.

At the University of California, San Francisco, School of Medicine, complaints by students in the late 1990s led to a line being added to patient consent forms, specifically noting that women having gynecological surgery may be given a pelvic exam while they are under anesthesia.

Typically, the surgeon performing the operation conducts an exam to confirm the problem to be corrected by surgery.

Dr. Patricia Robertson, director of UCSF's obstetrics and gynecology clerkship, said students have also been directed to meet with the patient before each operation and explain how they will be involved in their care.

"The students, I think, were most upset because they felt there were students lining up in the operating room doing pelvic exams, who really had nothing to do with the patient," she said.

Most medical students today learn the basics of the pelvic exam by practicing on paid volunteers but eventually, they need to move on to real patients.

Anesthetized women are the perfect subjects, doctors said, because they are relaxed and unable to feel the sometimes painful mistakes of novice examiners.

Consent is still far from a universal practice.

At the Washington University School of Medicine in St. Louis, patients are told that students will be part of their care team, but aren't specifically told the treatment could include a pelvic exam for educational purposes.

There are similar policies at the University of Pennsylvania and the Johns Hopkins School of Medicine.

"I don't think any of us even think about it. It's just so standard as to how you train medical students," said Dr. Jessica Bienstock, residency program director at Johns Hopkins.

Many students, however, appear to disagree: 70 percent surveyed at Philadelphia-area hospitals in 1995 before they completed an obstetrics and gynecology clerkship said it was important to ask women for consent, according to a study published last month in the American Journal of Obstetrics and Gynecology.

Silver-Isenstadt, one of the study's authors, said that number dropped to 51 percent among students who had completed a clerkship, which he views as evidence of a cavalier attitude toward patient privacy.

Dr. Michael Gregory, a Boston public health physician who objected to the exams when he was a third-year student at Tufts University School of Medicine, said that while studies show most women will give their consent, doctors are afraid to ask.

"It's this paternalistic, patronizing view that the doctors know best ... We underestimate people's incredible charity, and their willingness to let us train," he said. "But I think that at a gut level, doctors understand that if they actually told patients that this was happening without their consent, people would be outraged."