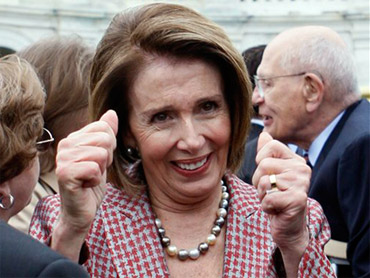 "Today we are about to deliver on the promise of making quality, affordable health care available for all Americans," House Speaker Nancy Pelosi said from the steps of the Capitol building. "We have listened to the American people. We are putting forth a bill that reflrects our best values and greatest challenges."

Lawmakers have said the legislation could be up for a vote on the House floor next week.

The legislation's unveiling caps months of arduous negotiations to bridge differences between liberal and moderate Democrats and blend health care overhaul bills passed by three separate committees over the summer.

The final product in the House, reflecting many of President Obama's priorities, includes new requirements for employers to offer insurance to their workers or face penalties, fines on Americans who don't purchase coverage and subsidies to help lower-income people do so. Insurance companies would face new prohibitions against charging much more to older people or denying coverage to people with health conditions.

The bill, Pelosi said, will insure 36 million more Americans, extending health coverage to around 96 percent of Americans. It brings "affordability for the middle class, security for our seniors and responsibility to our children," Pelosi said.

Still, some controversial issues need to be worked out.

While the bill includes a government-run insurance plan, or "public option," Democratic progressives are frustrated that it allows negotiated rates to providers instead of set rates, a complaint they're certain to voice in a White House meeting with President Barack Obama later in the day.

Rep. Lynn Woolsey, D-Calif., a co-chair of the Congressional Progressive Caucus, was noncommittal on Wednesday about whether progressives would accept the negotiated rates. "This is not walkaway time and it is not acceptance time," she said.

Other complications remain as well. A group of conservative Democrats are threatening to block the legislation unless it includes an explicit ban on taxpayer dollars funding abortions, reports CBS News correspondent Nancy Cordes.

"This is an urgently needed bill," House Majority Leader Steny Hoyer said Thursday, adding that "befitting the importance of this legislation, the process of putting it together has been deliberative, transparent and open... Health insurance reform has come through all that scrutiny and debate a stronger, better bill."

The bill would be paid for by taxing high-income people and cutting some $500 billion in payments to Medicare providers. Democrats issued a statement saying their measure "lowers costs for every patient" and would not add to federal deficits. They put the cost of coverage at under $900 billion over 10 years.

Obama issued a statement saying House Democrats had reached a "critical milestone" on the road toward a health care overhaul, and singled out the proposed government insurance option. He also said the bill "clearly meets two of the fundamental criteria I have set out: It is fully paid for and will reduce the deficit in the long term."

Republican reaction was swift and critical.

Rep. Tom Price, R-Ga., head of the Republican Study Committee, issued a statement saying Democrats had produced a "government takeover that will limit choice, competition and innovation in health care while increasing costs and decreasing quality." He said the measure would kill jobs, raise taxes and inflict cuts on a program of private Medicare that provides benefits to millions of seniors.

GOP leaders long ago decided to oppose the approach requested by Obama and taken by Democrats, and health care is expected to figure in next year's congressional election campaign.

Plenty of work remains to be done before a bill could land on Mr. Obama's desk - and there's still no guarantee that Congress can complete the legislation before year's end, as the president wants. If Mr. Obama does sign a health overhaul bill, he will have bucked decades of failed attempts by past administrations, most recently by former President Bill Clinton in the 1990s.

House leaders hope to finish the bill before Veteran's Day, Nov. 11. The Senate is aiming to start debate sometime in the next several weeks. Senate Majority Leader Harry Reid, D-Nev., is trying to round up support among moderate Democrats for his bill, which includes a modified government insurance option that states could opt out of.

Bills passed by the House and Senate would have to be merged before a final product could be sent to Mr. Obama, and there are a number of differences between the two chambers that would have to be reconciled. Among them are the different approaches to the public plan. The House does not include the opt-out provision for states, and it has more stringent requirements for employers. The Senate would use a tax on high-value insurance plans to pay for the bill, an approach that the House version doesn't have.