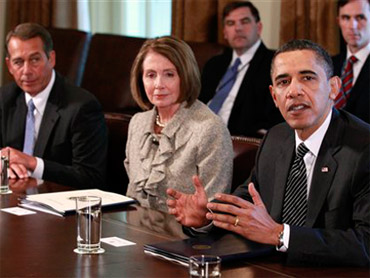 Hers was the face on the grainy negative TV ads that helped defeat scores of Democrats. His agenda, re-election chances and legacy are on the line.

Rep. Nancy Pelosi of California, chosen after a messy family feud among Democrats to remain as their leader in the new Congress, and President Barack Obama share a keen interest in repairing their injured party after this month's staggering losses.

But Pelosi's mandate is diverging from the president's at a critical time, with potentially damaging consequences for Obama's ability to cut deals with Republicans in the new Congress.

Their partnership is strained after an election in which Pelosi and many Democrats feel the White House failed them. They believe Obama and his team muddled the party's message and didn't act soon enough to provide cover for incumbents who cast tough votes for his marquee initiatives.

Pelosi will lead Democrats "in pulling on the president's shirttails to make sure that he doesn't move from center-right to far-right," said Rep. Lynn Woolsey, D-Calif., a co-chair of the liberal Progressive Caucus in the House. "We think if he'd done less compromising in the last two years, there's a good chance we'd have had a jobs bill that would have created real jobs, and then we wouldn't even be worrying about having lost elections."

Behind Democrats' decision to keep Pelosi as their leader after historic losses lies intense concern among liberals who dominate the party's ranks on Capitol Hill: They fear Obama will go too far in accommodating the GOP in the new era of divided government. Pelosi is seen as a counterweight to that political phenomenom.

She's done so before. When Democrats panicked after losing their Senate supermajority last winter, Pelosi rebuffed feelers by then-White House Chief of Staff Rahm Emanuel and others to settle for a smaller health care bill. She derided the approach as "kiddie care" and pushed forward with the sweeping overhaul she painstakingly steered through the House by a razor-thin margin.

A more recent example is Pelosi's stated refusal to consider extending Bush-era income tax cuts for the highest brackets past their January expiration. Obama's aides recently signaled he might be open to doing so temporarily if that were the only way of preserving the tax cuts for the middle class - a bargain the president had steadfastly resisted before the election.

Such a deal wouldn't be acceptable to her or House Democrats, Pelosi told the president last week.

Pelosi "can provide that balance with the White House," said Rep. Elijah Cummings, D-Md. House Democrats "want to make sure that they've got somebody at the table with the president, looking him eye-to-eye and saying basically, 'You've got some people who have been very, very loyal to you - not just progressives but moderates, too - and they truly believe that that's not the right thing to do.' "

The White House says Obama and Pelosi have uniform goals and a proven track record of working together, and insists they're on the same page on important issues, particularly preserving the health care and financial regulation laws enacted this year against Republicans' promised attempts to roll them back.

"The president and Speaker Pelosi have enjoyed a remarkably productive working relationship over the last two years, and he looks forward to continuing to work with her on an agenda to strengthen the economy, create jobs and move America forward," said Josh Earnest, a White House spokesman.

The president isn't going to be in a position during the next two years to work exclusively with either Democrats or Republicans, his aides argue. His challenge will be determining - with input from Pelosi and Senate Democratic Leader Harry Reid of Nevada, among others - what concessions he needs from the GOP to forge a good compromise, the aides say.

People close to Pelosi say she may trust the president more than some of her allies in Congress do to defend core Democratic principles in his dealings with the GOP.

Some Democrats argue that Pelosi's liberal streak might help the president in that context - a bad cop to Obama's good cop.

"In his negotiations with the Republicans, (Obama) needs to be able to say, 'Look, you say you're not going to compromise, but I've got Nancy Pelosi over here who is very passionate about these issues, and I have to listen to what she's saying,' " Cummings said.

It's not likely to be a tidy process.

A band of centrist Democrats who last week failed to oust Pelosi in favor of a fresh, more moderate face for the party is ready to side with Republicans on key issues next year. They say they're eager to work with Obama and the GOP on middle-of-the-road initiatives that are unlikely to be embraced by Pelosi or her liberal allies.

"I'd like to think there's an opportunity to do that," said Rep. Jim Matheson, D-Utah, a leader of the conservative "Blue Dog" Democrats.

The coalition, comprised mostly of Southerners who were once known as "Yellow Dog" Democrats, was born after the Republican takeover of 1994, when it was said they felt "choked blue" by their colleagues on the left.

In those days, Matheson noted, they worked with then-President Bill Clinton on welfare reform and balancing the budget - things that enraged liberals and led to angry accusations that the president was betraying his own party. Welfare is "an example of being honest brokers, working together to get things done, and that's what Blue Dogs want to do."

It's not what Pelosi or many other Democrats have in mind.

Rep. Brian Higgins, D-N.Y., said Democrats learned from the last two years and their shellacking at the polls that "we need to be more aggressive with the White House. They were looking for what was acceptable and then moving toward that, instead of what was important, and moving toward that," Higgins said. "We need to be true to our principles."