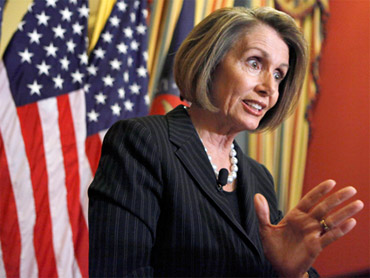 House Speaker Nancy Pelosi, arguably the left's best ally in Washington, was greeted by angry liberal hecklers this morning at a Washington conference for progressive activists.

A group of protesters donned in orange shirts, some in wheelchairs, started shouting minutes after Pelosi began speaking at the America's Future Now conference, according to reports. The conference is hosted by the liberal group Campaign for America's Future.

Pelosi was forced to yell her entire 28-minute speech, the Washington Post reports, as the protesters yelled, "Our homes, not nursing homes." The demonstrators reportedly belonged to the disability group ADAPT and were protesting in support of the Community Choice Act, a bill that would give those eligible for nursing home care the choice of in-home, community-assisted support.

"We supported Obama. We supported you," one protester shouted, the Post reports. "We supported the campaign... but we don't want to be taken from our homes."

Pelosi addressed their concerns, according to liberal blog FireDogLake, suggesting that a measure included in the Democrats' health care reforms -- the CLASS Act -- would lead to better long-term care. The Community Living Assistance Services and Supports (CLASS) Act is supposed to create a new government fund to insure people in the event they become disabled. The new, nationwide insurance program would be financed through payroll deductions with opt-out enrollment.

Can Democrats Wrestle The Populist Mantle From The Tea Partiers? Progressives Want More from Obama

Another group of protesters was also present, to demonstrate against U.S. policy toward Israel. This video shows the group holding up a large banner next to the stage that read, "Stop funding Israel terror." FireDogLake reports the protesters were part of the anti-war group Code Pink.

Pelosi's security detail offered to remove the protesters, the Post reports, but two conference organizers on stage with the speaker said she opted to let them stay because she believes in free speech. The speaker said to the audience, "Thank you for your impatience as advocates for change," according to FireDogLake.

Both the attendees and the presenters at the liberal conference have expressed anger and impatience with President Obama and the Democratic majority for failing to seemingly live up to their expectations and for failing to respond to progressives' growing resentment. But the protest against Pelosi could still be considered surprising, given that presenters at the conference noted yesterday that she has been one of the left's strongest allies in Congress and that the House has managed to deliver on campaign promises -- such as passing climate change legislation -- where the Senate has so far failed.