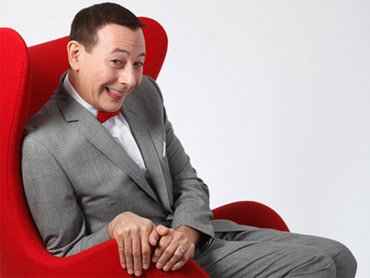 The star may be Pee-wee, but his new live stage show is absolutely huge.

"The Pee-wee Herman Show," opening next month in downtown Los Angeles at Club Nokia theater, cost millions to mount. It boasts 11 actors, 20 puppets and marks the show's first production since 1982.

"Well, you know, I really want to make a movie version of 'The Playhouse,' my Saturday morning kid show!" said actor Paul Reubens, in an interview earlier this week in which he stayed in his exuberant Pee-wee persona.

"This seemed like a great way to do it: reintroduce it, get back out there, introduce Pee-wee to the new generation that didn't know about it."

An impulsive, sometimes naughty child living a fantastical world, the Pee-wee character first made a big splash with the live "The Pee-wee Herman Show," which debuted at Groundlings theater in Los Angeles in 1981. An HBO broadcast of the show spread the Pee-wee gospel across the country later that year, and a 1985 Tim Burton-directed feature film, "Pee-wee's Big Adventure," was an acclaimed and popular success.

Then came the television series, "Pee-wee's Playhouse" (1986-91), which ran for five seasons, earned 22 Emmys and attracted not only children but adults to Saturday-morning television.

Pee-wee was shelved after Reubens' July 1991 arrest for indecent exposure in an adult-movie house in Sarasota, Florida, resulting in a small fine. Reubens, now 57, continued to act, playing characters other than Pee-wee, scoring successes as the Penguin's father in "Batman Returns" (1992) and a 1995 Emmy nomination for a recurring guest role on "Murphy Brown." But Pee-wee would ultimately rise again.

"Well, I went back and forth between wanting to do it and not wanting to do (the new stage show)," Pee-wee said. "I had a producer that was calling me every two months for two years. And every two months, I would change my mind. And then, finally, one day I woke up and decided, 'This is it, I'm coming back."

As with the original stage show, the new production spins around Pee-wee's desire to fly. The menagerie of "Playhouse" characters is back, as are some of the original cast members, including Lynne Stewart as Miss Yvonne, John Moody as Mailman Mike and John Paragon as Jambi the Genie.

"The Pee-wee Herman Show" is scheduled to run for a limited four-week engagement, Jan. 12- Feb. 7.