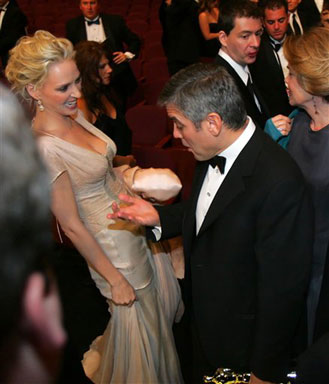 The Boston Red Sox encircled Pedro Martinez in their clubhouse, pouring champagne on their star pitcher as the walls shook to a salsa beat.

Just three days after he and his team were both counted out, Martinez brought the Red Sox all the way back.

After dropping the first two games and losing Martinez and Nomar Garciaparra to injuries, the Red Sox outslugged the Cleveland Indians 12-8 Monday night to win Game 5 of their first-round playoff series and advance to an AL championship series matchup with the New York Yankees.

"You might say we're celebrating a little too hard," pitcher Bret Saberhagen said in the middle of the Red Sox party. "But after a series like this, you have to kick off your shoes a little bit."

Gonzalez Will Sit Out All-Star

"I wouldn't come out," Martinez said. "As long as I was able to throw the ball over the plate, I was going to stay in there."

Troy O'Leary supplied the offense, twice thwarting the Indians' strategy of intentionally walking Garciaparra by driving in seven runs with a pair of homers including the first postseason grand slam in Red Sox history.

With the shocking win, the wild-card Red Sox will play their hated rival in the postseason for the first time, starting Wednesday night at Yankee Stadium.

It was too early for manager Jimy Williams to begin worrying about pitchng matchups against the defending World Series champions.

The five games were a blur of comebacks, injuries, pitching changes and runs, runs and runs 79 in all, three short of the record for postseason series.

O'Leary, who went 0-for-6 in Game 4, hit his slam in the third and snapped an 8-8 tie in the seventh with a three-run homer as the Red Sox, trying for their first World Series title since 1918, became the fifth major league team to rally from an 0-2 deficit in a best-of-5 playoff series.

Martinez pulled himself from his start in the opener after four innings with a strained muscle in his back. And it got worse for the Red Sox when Garciaparra was unable to go in Game 3 because of an injured wrist.

But Boston pounced on Cleveland's shaky pitching staff, scoring nine runs in Game 3 before shattering records with their 23-7 rout in Game 4.

But Martinez brought some sanity to a series of atrocious pitching, putting an exclamation point on his dominating 1999 season. The right-hander, who went 23-4 during the regular season, will now get a chance to pitch the Red Sox back to the World Series for the first time since 1986.

"He couldn't even pick up the ball two days' ago," Saberhagen said, "and was almost in tears. He's just the most unbelievable pitcher I've ever seen in my life."

Meanwhile, the Indians, who have been waiting since 1948 to win a Series, were denied a third straight trip to the ALCS when their pitching staff collapsed.

Jim Thome homered twice and Travis Fryman hit a solo shot for the Indians, who will now spend the winter wondering why they could never shake an injury bug that plagued them all season.

"We were shorthanded, beat up and we still went out and gave a great effort," Indians catcher Sandy Alomar said. "We battled but we just got beat. Once they got the momentum, it was like trying to climb Mount Everest."

Cleveland's offseason also could include an agreement to sell the team that came within two outs of winning the Series in 1997 and has won five straight AL Central titles.

With the score 8-8 in the seventh, O'Leary made the Indians pay for eleting to walk Garciaparra again.

Facing loser Paul Shuey, John Valentin singled and, after a forceout, Indians manager Mike Hargrove decided to walk Garciaparra, who hit .451 against Cleveland during the regular season (23-for-51) with 17 RBIs in 12 games.

And for the second time, the strategy blew up in Hargrove's face, with O'Leary hitting Shuey's first pitch over the right-field wall for an 11-8 lead.

Given the cushion, Martinez took the Red Sox home from there, fanning Vizquel for the final out to give Boston its first win in a postseason series since 1986.

Martinez crouched at the edge of the mound and was hugged by catcher Jason Varitek as the Red Sox poured onto the field to celebrate a series that three days earlier they couldn't have imagined winning.

O'Leary's slam helped Boston overcome a 5-2 deficit in the third off starter Charles Nagy, who was pitching on three days' rest for the second time in his career. Nagy intentionally walked Garciaparra and grooved a fastball that O'Leary hit over the wall in right-center.

"We chose to put him on rather than pitch around him tonight," Hargrove said. "We had been handling O'Leary up until tonight."

However, the Indians answered against Derek Lowe in the bottom half, getting an RBI double from Manny Ramirez, who had been hitless in his first 17 at-bats of the series with seven strikeouts.

Thome then connected for his second homer of the game, a 431-foot shot to center that gave Cleveland an 8-7 lead. It was the 16th career postseason homer for Thome, moving him ahead of Babe Ruth into third on the career list, trailing only Mickey Mantle and Reggie Jackson, who each hit 18.

The Red Sox tied it in the fourth on John Valentin's sacrifice fly, and then turned it over to Martinez. The right-hander, who could hardly play a game of catch on Saturday, told Red Sox manager Jimy Williams before the game they he could pitch if needed.

Embarrassed after getting blown out in Gam 4, the Indians came out swinging in the first against Bret Saberhagen, who again struggled with his control and didn't get out of the second.

Vizquel hit an RBI double, and two outs later, Thome launched a 477-foot homer. As he approached first, Thome screamed at the ball to get out, and it did for his 15th career postseason homer.

The Indians didn't allow Saberhagen to relax in the second as Wil Cordero singled and Fryman homered. Fryman's towering shot was initially ruled a double, but after Hargrove complained, the umpires waved Fryman around.

Picking up right where they left off in Game 4, the Red Sox got to Nagy for two runs in the first on Garciaparra's second homer of the series.