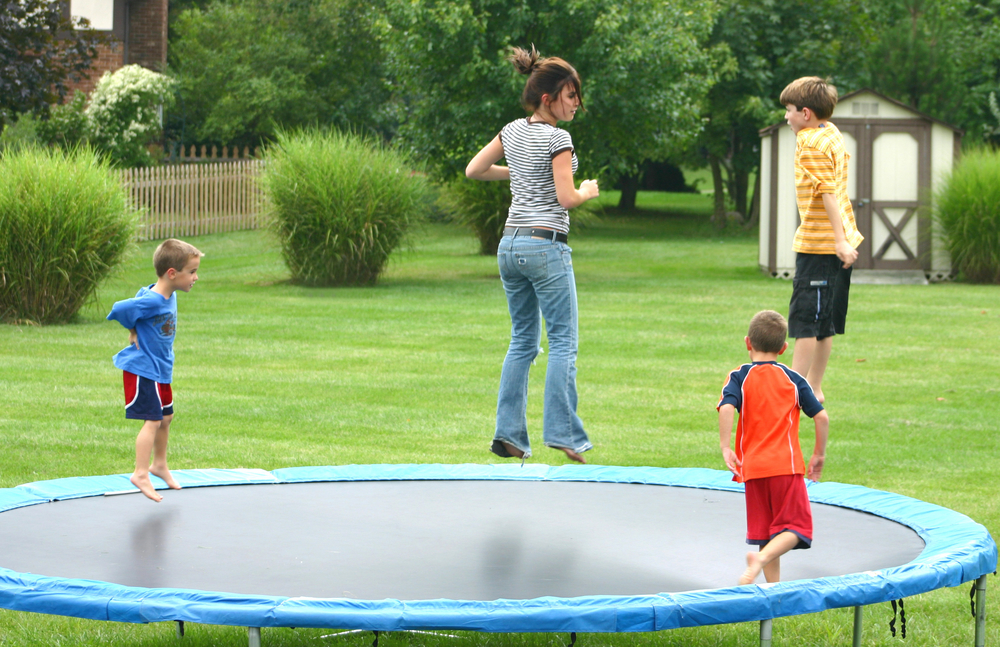 (CBS News) The American Academy of Pediatrics (AAP) is discouraging the recreational use of trampolines, saying the activity poses a major injury risk for kids and there's no clear way to reduce chances of getting hurt.

The modern trampoline was patented by competitive gymnast George Nissen in 1945, designed for acrobats, gymnasts and eventually used by the military for training, according to the AAP. But at-home recreational trampoline use has increased in recent decades as the products have become more affordable.

The new guidance is published in the Sept 24 issue of the academy's journal, Pediatrics.

In 2009, the last year of available data, trampoline injury rates were 70 injuries per 100,000  children ages 0- to 4-years-old and 160 injuries per 100,000 5- to 14-year-olds, for a total of 98,000 injuries that year. Kids in the older age group were more likely to use a bicycle or other unsafe equipment on the trampoline. Between three percent and 14 percent of the injuries require hospitalization.

"Unfortunately, the very forces that make trampoline use fun for many children also lead to unique injury mechanisms and patterns of injury," the statement's authors write.

Three-quarters of all trampoline injuries occur when several kids are bouncing at the same time, with the smallest kids 14 times more likely to get injured than their heavier counterparts, due to the added force the bigger kids create by jumping that gets absorbed by the smaller kids.

Falls account for up to 40 percent of trampoline injuries, with risk increased when the trampoline is placed on uneven ground, In recent years, companies have sold netting and other perimeter enclosures for trampolines, but researchers from the AAP said there is no evidence the safety features reduce injury risk. Some of the kids even opted to climb the netting, further risking injury.

Injuries include fractures, dislocations, sprains, strains, bruises and other soft-tissue injuries, with young children under 6 the group most likely to get hurt. Bone injuries are also more likely in younger kids. Ankle injuries, head and neck injuries (which in rare cases resulted in permanent neurological damage), spinal injuries, shin fractures, chest fractures and other serious injuries have been reported in studies the AAP reviewed.

Failed attempts at somersaults and flips while on a trampoline may especially result in cervical spine injuries, some with permanent consequences.

Despite adult supervision, multiple studies show that up to one-half of trampoline inuries occur when an adult is nearby.

The injury rates are similar to those of home swimming pools, say the AAP. But with swimming pools, there are evidence-based safety measures for reducing risk such as four-sided fencing that surrounds the pool, but for trampolines there's no evidence-baked safety measures. What's more, many parents - if they're supervising - don't even know basic safety tips like limiting trampoline use to one child at a time.

The AAP recommends avoiding recreational trampoline use entirely. If a child or teen still wants a trampoline in their lives, the academy says using a structured sports training program with appropriate supervision, coaching and safety measures already in place. If a family still wants a trampoline at home, check with your insurance provider to make sure it covers trampoline-related injury claims.

Dr. Robert Glatter, an emergency medicine physician at Lenox Hill Hospital in New York City who wasn't involved in the new policy statement, told CBSNews.com in an email, "Although parents may see the trampoline as a fun and engaging way to have their children exercise, the potential for serious and catastrophic injury should make them think twice about this dangerous activity."