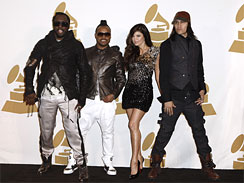 It seems you couldn't go anywhere this year without hearing Beyonce's "Single Ladies" - and now the star and the song lead the Grammy race.

Beyonce has 10 nominations, but she's got some rather "sing"-ular competition.

The Black Eyed Peas did it, alright; they are nominated for six Grammy Awards, including record and album of the year. They described their feelings in one word.

"So you said you had a feeling - six nominations. How are you feeling now?" Kauffman asked.

Beyonce's "Single Ladies" is up for best song - one of her 10 nominations.

It was also a "record" year for the young superstar Taylor Swift - with a personal best of eight Grammy nods.

Not far behind is this year's comeback kid, Maxwell, with six nominations.

"How many people get to disappear for seven years, then come back and strike gold like this?" Kauffman asked.

"This is a miracle, this is a miracle," Maxwell said. "But I'm just grateful that the people didn't forget me. That they actually feel the genuine life that is behind the music that I'm singing."

A nominee last year, Katy Perry is back with another bid.

"You're used to this?" Kauffman asked.

"Yeah, I'm so used to this! No, not at all," Perry said. "It feels really encouraging. To think that one little old record that I worked on for five years and believed in and felt like I toured the world with it and it's still continuing, is a little success, or it's a big success!"

"Lady Gaga's producer told me he almost didn't take the gig because he only wanted to work with "established" stars. Bet he's glad he changed his mind!" Kauffman said.