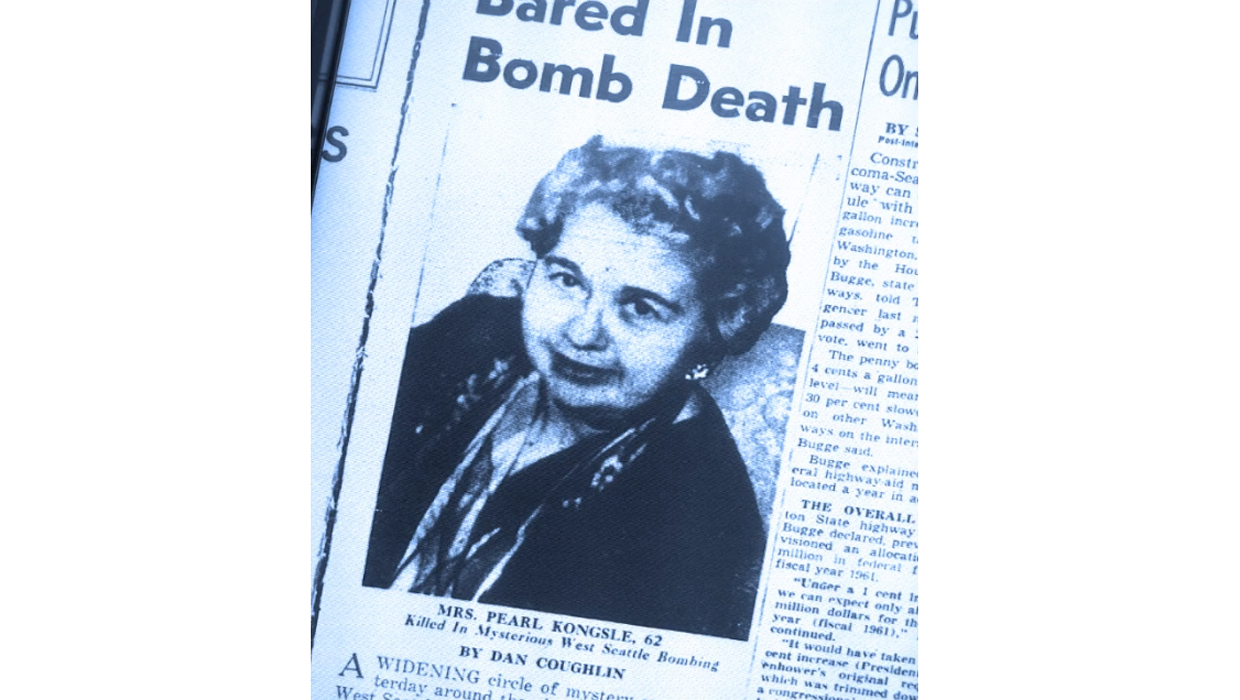 Detective Mike Ciesynski has spent 32 years at Seattle Police Department. During more than two decades working homicide, he has interviewed mass murderers and 11 serial killers and closed several long-unsolved cases. Here, he weighs in on the 1959 bombing death of Pearl Kongsle in the hopes someone has information about the very cold case.

SEATTLE, Wash. -- Pearl Kongsle, a 62-year-old widow with no known enemies, was enjoying a Seattle fall evening with friends in 1959 when she stepped outside to examine a paper bag on her front stoop. Inside was a powerful bomb that detonated, scorching her body and tearing her right hand from her arm, killing her. Now, 57 years later, with retirement looming after a long career in homicide at the Seattle Police Department, I would like to solve this case before I leave.

The original homicide detectives are deceased, as are most of the witnesses -- that's why I get involved as the cold case detective.

If you're asking why some cases bother detectives more than others, the only response I have is, "I don't know, they just do." Most cold case detectives have one or two cases they know they'll never solve. And the longer you work homicide, the longer the list becomes. It doesn't mean we don't care about the victims in these cases. It just means that we have to put these cases on the far back burner and hope one day we get "the call," the one that says, "Ski, you got a call. Some guy wants to yack about one of your murders."

That's what I hope happens in this case.

So, I order the Pearl Kongsle case file from our records vault, wipe off the dust and give it a read, being careful with the carbon paper. "Mystery Blast Kills West Seattle Woman;" "Seattle Woman Killed, Mystery Blast Hurts 2 Friends;" "Bomb Death Puzzles Police;" "Investigators of Bomb Death Still Without Strong Clue." These are just a few of the September 1959 Seattle headlines.

At that time, bombing cases were rare, though they would become more common in the next decade. A 1963 Seattle newspaper ran a front page story, "Who Killed Pearl Kongsle?" In the same newspaper's movie section, Tippi Hedren is the leading lady in Alfred Hitchcock's "The Birds," and Gregory Peck is starring in "To Kill a Mockingbird." Long time ago, right?

This case has been unsolved for 57 years. It has a low chance of solvability, and I have other cases to investigate, but none as cold as this one. Reviewing the file now, I can see the trail the detectives followed. But my job is to get off that trail and find a new route.

On Sept. 2, 1959, Kongsle went to dinner with two friends. The women passed on dessert because her next door neighbor, Mrs. Alberta Bowman, had made a pie they decided to share back at Kongsle's townhouse. When they returned, Bowman went next door to get the pie, and she noticed a quart size paper bag on Kongsle's top outdoor stair. Bowman touched the bag and believed she heard ticking.

Later, she would tell detectives the bag felt strangely alive.

Bowman went into Kongsle's house, as Kongsle was hanging up the phone, and told her about the mysterious bag.

Kongsle walked down her front stairs to where the bag was. She stood over it, then placed her right leg on the same concrete step where it rested. Bowman called out to her not to touch it. But Kongsle waved her off, and with her right hand attempted to pick up the bag.

It exploded - killing her instantly.

The force of the blast threw Bowman and the other woman against the façade, buckled the roof and blew out windows of several homes. Police and fire rushed to the scene and a massive investigation began.

Detectives interviewed hundreds of people and polygraphed all persons of interest. FBI technicians believed dynamite was the explosive, but were unable to locate a triggering device.

Over time many theories were hashed around. Kongsle had a live-in boarder who owned a Golden Retriever that neighbors complained barked incessantly. Was the bomb meant for the dog whose chain would just reach the stair where the bomb was placed?

Who was Kongsle talking to on the phone when Bowman entered the residence? She looked perplexed when she hung up the phone, Bowman said.

A 1949 Chevrolet with three young men was seen screeching away from the area shortly after the blast. Could they have placed the bomb as a prank that went horribly wrong? Neither the vehicle, nor the youths were ever located.

An ATF bomb expert reviewing the case this year determined that the device was a "victim-operated, electric initiated bomb made from dynamite." This means that when Kongsle picked up the device, she initiated a mercury switch, detonating the dynamite. Both dynamite and mercury were easily accessible in 1959. Who would know how to make such a device?

What are my chances of even finding the suspect alive? Minimal. But having arrested and convicted a couple of serial murderers from the late '60s, I always have hope.

Can you imagine if this happened today and we couldn't find the culprit? This was a big case in 1959 and I would like to draw some attention to it again. Maybe this article will jog someone's memory or at least create some conversation.