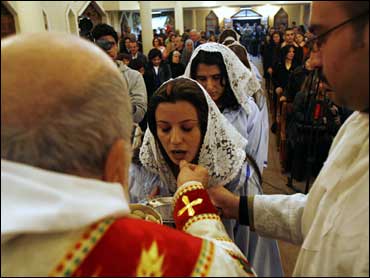 Iraq has been enjoying one of its most peaceful holiday seasons in years, but fear of violence persists, and the country's first cardinal made a Christmas appeal Monday for those who have fled to return and help rebuild their shattered country.

Cardinal Emmanuel III Delly, leader of the ancient Chaldean Church, told The Associated Press at his guarded compound in west Baghdad that his message was one of love and for "charity towards everyone.

"And for the emigrants to return home, to work for the good of their country and their homeland despite the situation which their country is in. That is my hope."

President Bush made Christmas Eve calls to 10 U.S. troops serving in Iraq, Afghanistan and other spots around the world, thanking them for their sacrifice and wishing them a happy holiday even though they'll be far away from their families and friends.

The president made his calls Monday from the Camp David presidential retreat in the Maryland mountains, where he is spending Christmas. He spoke with members of the Army, Navy, Marines, Air Force and U.S. Coast Guard, including seven serving in Iraq.

White House press secretary Dana Perino said Mr. Bush knows it is difficult for the children of U.S. servicemen and women to understand why their fathers and mothers cannot be home for the holidays. Mr. Bush said that when the children are older, he hopes they'll understand and appreciate their parents' sacrifice, Perino said.

So far the holiday season has been peaceful. Last year, more than 2,300 people died in war-related violence, compared to about 540 so far this month, according to an Associated Press count.

Violence has fallen across the country by 60 percent since June, according to U.S. military figures. But security is still poor and few Iraqis dare stray too far from home. The threat of kidnapping, car bombs and suicide bombers is never far, and the dead bodies of tortured kidnap victims turn up almost daily along river banks or dumped on the streets.

Sectarian violence has declined largely because of a surge by thousands of U.S. troops, the help of Sunni Arab irregulars who have turned against al Qaeda in Iraq and are now funded by the United States, and a cease-fire by radical Shiite cleric Muqtada al-Sadr and his Mahdi Army.

Still, attacks continued across the country Monday. A bomb exploded in a minivan bus near the Baghdad governor's office, not far from the heavily guarded Green Zone that houses the Iraqi government and several western embassies. Two people were killed and six were wounded.

The bomb exploded near the heavily guarded Green Zone, which houses the Iraqi government, the U.S. and some other western embassies.

In northern Iraq, gunmen believed to be members of Ansar al Sunnah, al Qaeda in Iraq-linked militant group, attacked a police custom unit at the Garmek border area, killing a policeman and wounding three others, said police Brig. Hasan Noori, director of Sulaimaniyah security department. Garmek, an area near the Iranian border, is about 50 miles east of Sulaimaniyah.

As Shiites celebrated the end of Eid al-Adha Monday, one of the Muslim calendar's most important holidays, members of Iraq's small Catholic community gathered in churches for Midnight Mass — held in the middle of the afternoon because few people dare venture out after dark. Eid ended for Sunnis on Sunday.

"Let's hope that it's getting better, but I think that it's the same," Delly said, the colorful lights twinkling on a Christmas tree behind him. "Because everyone is still afraid to go out. ... Because of the car bombs etcetera, and other things. Even small animals are afraid of the danger."

The 80-year-old Delly was elevated to the rank of cardinal last month.

Christians have often been targeted by Islamic extremists, forcing tens of thousands to flee and isolating many of those who remained in neighborhoods protected by barricades and checkpoints. Less than 3 percent of Iraq's 26 million people are Christians — the majority of which are Chaldean-Assyrians and Armenians, with small numbers of Roman Catholics.

Experts point out that the issue of how to reintegrate the growing number of Sunni Arabs joining the volunteer forces looms for 2008. There are about 70,000 members of the groups known as Awakening Councils, and their numbers are increasing fast. The Shiite-dominated government is deeply concerned about the groups, many of which are made up of former Sunni insurgents who once battled both the American forces and their Shiite allies.

But failing to bring them into the fold of Iraq's security forces could jeopardize the recent improvements in security, the country's Sunni Arab vice president said Monday.

"This experience should be lost because of national discord on how to absorb these Awakening (Councils). Those people, I say very clearly, should not be ignored by the government," Tareq al-Hashemi said at a news conference in northern Iraq.

"These people have offered themselves as targets to fight terrorism, voluntarily. They must have the government's support," he said. "And I say it very clearly: Iraq is at a crossroads. Either these people are supported, or this successful experiment will face a reversal. And, God forbid, if there is a reversal, I think there will be a regression of the security successes that Iraq has seen."

One road could be political empowerment and in Ramadi, the capital of western Anbar province, Awakening Council leaders, the provincial governor, local officials and politicians formed an advisory group to help draw up policy for the region.

A document forming the "The Supreme Anbar Council" was signed by six leading figures in the province, including Ahmed Bizayie Abu Risha, the brother of the man who founded the awakening movement. Abdul-Sattar Abu Risha was killed by a bomb in September, 10 days after meeting Mr. Bush at a U.S. base in Anbar.

Abu Risha told reporters that the council would support "governmental legislative and executive bodies," and would seek to represent "represent the province in talks with the central government."