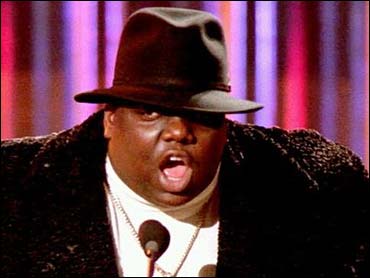 A federal judge has ordered the city and police department to pay slain rap star Notorious B.I.G.'s family "fees and costs incurred as a result of defendants' misconduct" in the family's wrongful death lawsuit.

U.S. District Judge Florence-Marie Cooper declared a mistrial in the case, rejecting the city's argument that LAPD Detective Steven Katz had forgotten about documents in his desk drawer until his office was searched last month.

The documents detail Katz's investigation of a prison informant's claim that corrupt former LAPD officers Rafael Perez and David Mack were involved in the 1997 killing of the chart-topping New York rapper, whose real name was Christopher Wallace. Cooper said the LAPD still has not turned over other files to the plaintiffs, including about 15 personnel complaint investigations into Mack.

"The detective, acting alone or in concert with others, made a decision to conceal from the plaintiffs in this case information which could have supported their contention that David Mack was responsible for the Wallace murder," Cooper wrote in an order released Thursday affirming the family's request for a mistrial and sanctions.

Attorney Perry Sanders Jr. said the family would refile the suit, but he didn't know when. It is expected to accuse the LAPD of racketeering and to name Perez as a defendant.

Wallace's mother Voletta also spoke publicly about her son's death for the first time in years.

"Eight years, three months and 29 days (ago) today, my son was murdered in this town, in this city. For all that time I've labored with pain and sweat just to find out the truth of what happened," she said, adding that her suit "was not about money."

Police Chief William Bratton, in a separate news conference, forcefully denied the department had covered for Mack, currently serving a 14-year prison sentence for bank robbery, or his one-time partner Perez, the key figure in the LAPD Rampart corruption scandal.

"What the hell do we want to protect those two scumbags for?" Bratton said, noting that LAPD and FBI investigations failed to implicate either man. He added that the department was investigating Katz's "oversight."

The link to Perez emerged only after an anonymous tip during trial. LAPD documents show that Kenny Boagni, who became friends with Perez in prison, told detectives in 2000 and 2001 that Perez had acknowledged moonlighting in a security role for Death Row on the night Wallace was killed, and had called Mack just before the shooting.

Perez's attorney, Winston McKesson, said that if the Wallace family sues his client, he will respond by suing them for malicious prosecution.